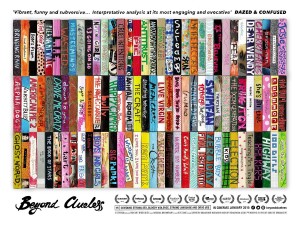 Cinema is of such an age now that we’ve all grown up in its shadow. We each have our own beloved film that offers a cinematic marker to our fumbling, formative years. Yes, that genre graced with the affectionate moniker of ‘the teen movie’ is a vicarious rite-of-passage and giddy theatrical pill; offering an escape for all whilst the stop is made in that halfway house between the two ‘hoods; child and adult.

It is a subject ripe for scrutiny and a theme worthy of analysis, which brings us neatly to this very documentary. Sculpted with the assistance of over 200 movies from the genre, and featuring no talking heads whatsoever, critic-turned-filmmaker Charlie Lyne has engaged in an ambitious project. With a starting point of the mid-90s, the youth of the Generation X era is its year zero. From there we travel onwards.

Beyond Clueless doesn’t delve down the dark alleyways of something like Larry Clark’s Kids (1995) or Kassovitz’s La Haine (1995). Nor does it reflect on the iconic turns that are synonymous with way back when, such as James Dean in Rebel Without A Cause (1955) or Malcolm McDowall in If…(1968). And there’s no mentioned of Porky’s (1982) either. Instead, we have stop-offs at such pop culture mainstays as Mean Girls (2004), The Craft (1998), She’s All That (1999) and many more of their scruffy, fluffy peers.  Whilst eschewing the darkest fringes of the genre, there is much joy to be had in the clips from all of the aforementioned films, whilst the deliciously insouciant voiceover is delivered with relish by cult star Fairuza Balk.

Primarily, Lyne puts the spotlight on the social hierarchy within the school system, focusing on the recurring role/s of the frat boys, jocks, cheerleaders and nerds in their respective quadrants. In doing so, he showcases the genre’s interest in how these group dynamics work – both in isolation and in the wider setting – whilst individuals wrestle with their own identity. Unfortunately, the documentary is not always successful in building bridges across the films to bind broader insights. The self-imposed limitations of the exercise – utilising archival footage alone in order to stitch together the piece – sometimes feels like a bar to this being achieved.

Above all though, this is an enjoyable film that basks in the reflected glow of nostalgia. The editing is sharp and punchy. The collages work with a fleeting, yet also incisive, meter. And the bespoke soundtrack (created by Summer Camp) works wonders.

If you fancy a light-hearted 90 minute flick through the teen movie genre, then you could do a lot worse than have a cheeky tumble with Beyond Clueless.