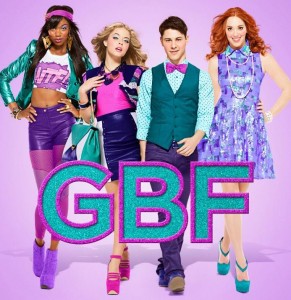 Meta teen comedy G.B.F. explores adolescence through an oft-forgotten point of view: the gay hero. While lacking the bite of director Darren Stein’s Jawbreaker, it should not be compared to its darker sibling. High school culture proves pivotal to each, but G.B.F. relies on a lighter kind of satirical comedy. And while the film easily could have become heavy, it thankfully did not. Instead it aptly tackles the issue of acceptance while ever-provoking laughter.

Tanner Daniels and Brent Van Camp are gay best friends, even if neither is out at high school. Brent intends to come out and to become instantly popular as the must-have-teen-girl accessory: the Gay Best Friend. Tanner, however, would rather maintain his high school anonymity. Brent’s plan quickly goes awry when classmates link Tanner to a Grindr-like social media app. Tanner becomes the G.B.F. to three clique leaders, each vying for social dominance. As a result, Tanner and Brent’s relationship suffers.

While immediately identifiable as a teen comedy, complete with a Mean Girls-moment prom, G.B.F. is much more. Acceptance surely figures centrally but comes in so many forms, personal and familial. And while gay heroes push the plot forward, the film takes the time to explore how often even the most popular among us struggle with identity issues. The cheerleading captain may feel as if she must hide her intelligence, and the chaste do-gooder may feel as if she must suppress her desire. And commendably, the movie makes mockingly laughable only those characters who refuse to accept themselves.

Given the social-media and peer-pressure components of the film, G.B.F. could have become an attempted analysis of interconnectivity and repression. The film, to its credit, instead accepted such social realities at face value, built them into plot structure, and provided a passing comical critique that added yet another layer to the film.

Every lead actor and actress gives a solid performance, with Michael J. Willett standing out among his talented co-stars. Willett ably portrays Tanner, bringing to the fore Tanner’s vulnerability, sweetness, and resilience. Given the hyperbole so necessary to camp, dialogue could have overwhelmed a weaker actor than Willett. His performance is instead one of believability, even as self-referential witticisms continually break down the fourth wall. 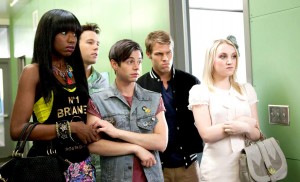 Supporting cast create as many memorable scenes as do the leads. Rebecca Gayheart, Natasha Lyonne, and Megan Mullally all add colour to the picture. Gayheart and Lyonne reward fans of 1990s and 2000s teen and indie films. Each provides some of the more memorable comedic moments in the film. Gayheart has some of the better one-liners, whereas Lyonne has some of the more outlandish ones. Both Gayheart and Lyonne have a kind of twinkle in the eye, which adds to the joke they share with the aware audience. In fact, Lyonne gives a performance nearly as effectively offbeat as she did in But I’m a Cheerleader and Die, Mommie, Die! Mullally, too, gives an energetic performance. Mullally perfectly portrays the awkward things a parent may do to make her gay son feel more comfortable in his own home, including a mother-son Brokeback Mountain movie night. Rather than being a caricature like Amy Poehler’s Mrs. George in Mean Girls, Mullally’s Mrs. Van Camp is refreshingly authentic.

Like cast performances, visual and audio components contribute to the well-rounded film. Costuming reminds one of the late 1990s and early 2000s films from which Stein draws. The colour-saturated and bold-patterned costumes would have been well-placed in any millennial music video. In fact, the pastel palette used mirrors that in Stein’s 1999 film Jawbreaker. The difference lies in how much richer the G.B.F. colours are. While costuming may be purposefully reminiscent of teen-comedy-watershed eras, the soundtrack decidedly belongs to present day. Fresh and heavily Los Angeles-esque, the synthpop- and dance-heavy soundtrack deserves attention in its own right. Paired with costuming, the soundtrack noticeably adds to the bombastic production value. 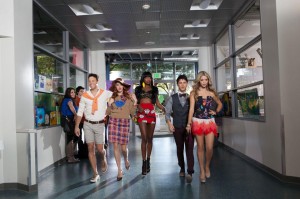 Giving a nod to teen classics, both of the John Hughes and Mean Girls variety, G.B.F. is anything but a pastiche. While in aesthetic it resembles predecessors, the film draws on genre conventions primarily for contextual framing. Immediately recognizable as a teen comedy, it instantly becomes relatable. In delivery, however, the film differs from Ringwald and Lohan movies. Unapologetically camp, it pushes the acceptance storyline into queer territory while maintaining a mass appeal. If ever someone asks whether I would recommend GBF, I would borrow one of the many quotable quips from the film: Was Drake in Degrassi?

G.B.F. is available on DVD and Blu-Ray 14 April. The DVD and Blu-Ray include special commentary from director Darren Stein as well as other special features. It is a Peccadillo Pictures release.