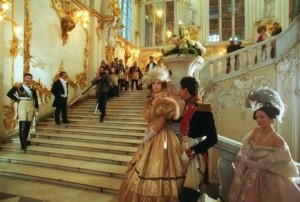 If, as Sergei Eisenstein put it, “montage is the nerve of cinema” – the master-tool, that is, by which meaning is constructed – then you might look no further than that fanciful sequence in François Truffaut’s 1962 film Jules and Jim, in which its three protagonists are able to tour the Louvre in three minutes only with the aid of editorial manipulation. Foregoing such trickery in Russian Ark (2002), Russian filmmaker Aleksandr Sokurov forms an impressive spatial and temporal fluidity with, in the first instance, roaming Steadicam and, in the second, an unedited 96-minute take through St. Petersburg’s Winter Palace (though the AV Festival‘s 35mm print was jaded enough for jump-cuts to distract between reels).

Even before we open up from a black screen, Tilman Büttner‘s camera is given a personality with which to wander curiously through the pristine halls and rooms of the palace – now a museum – with Sokurov himself narrating proceedings, suggesting from the outset that what we are viewing is the POV of some post-death spirit caught drifting in some undefined liminality. Early in the film – which Sokurov discusses briefly in The Art of Time, which began the AV Festival’s film programme – we acquire a tour guide-cum-fellow intruder, referred to as “the European” (Sergei Dreiden), who is meant to evoke the Marquis de Custine, a real-life 19th Century French aristocrat who wrote at length on Russia during his visit there in the 1830s. As the film develops, the European’s response to the Winter Palace evolves from mocking derision to quiet approval.

The opening reel is busy with extras, as Sokurov’s narrator situates us somewhere in the 1800s, but with some surprise, we glide into a room of exhibited artworks peopled by modern-day tourists, among whom are contemporary military figures who break the fourth wall with curiosity. Later in the film, we settle into a languid rhythm, as if embodying an imposter without purpose. Indeed, the gaze through which we view the film seems to be one of perpetual uncertainty, with periods in which its presence goes unacknowledged are offset with moments in which we – the European and us – are asked to leave by security. Similarly, the narration constantly shifts between being audible to the European and going unheard.

In Russian Ark, time is horizontal. In moving so fluidly through various episodes of Russia’s history – their recognisability dependent on the viewer’s familiarity with them – the film presents its past as some uneven canvas of overlapping temporalities, all of them as performative as the other: as such, the film inevitably poses questions to us regarding filmic reconstructions of the past and our expectations of – and perhaps even responsibilities toward – them. Placed as witnesses, however, we are only marginal participants.

Sokurov has spoken elsewhere of how he believes that humanity’s fate involves subordination and oppression, which is perhaps why the film is so tacitly celebratory of authority, with figures such as Peter the Great, Catherine the Great and Tsars Nicholas I and II presented in elegant splendour and regal harmoniousness, as it heads towards its energetic, uplifting send-off to a composition by Glinka, conducted by Valery Gergiev, real-life general and artistic director of the Mariinsky Theatre.

Such rapturous decadence is followed by the upper-class subjects’ descension of the palace’s Grand Staircase in a collective post-delirium exit of the building. Just as its representation of history likens it to a kind of theatre – with the suggestion throughout that an investigation of it is unavoidably transgessive – the camera breaks off from the crowd for a final, contemplative breather, thereby stopping short, by some four years, of one of the most important episodes not only of Russia’s 20th century, but the world’s: the 1917 revolution. 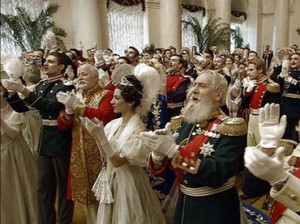 During October of that year, in the final days leading up to the revolution itself, the Winter Palace housed Russia’s Provisional Government, led by Kerensky and defended by a few servants who remained loyal to the long-ago ousted monarchy. Given his listless, apolitical portrayals of individual political leaders such as Hitler (1999’s Moloch), Lenin (2000’s Taurus) and Hirohito (2004’s The Sun), it’s no surprise that Sokurov excludes from Russian Ark the stretch of history that has arguably determined his own artistic and intellectual constitution.

For many, the director continues the legacy left to him by Tarkovsky. Such observations are twofold, however: the association of Sokurov’s cinema to that of his apparent predecessor is obviously due in some way to the very vague similiarities in style – a tendency towards the “poetic” or “abstract”, embodied (or perceived to be embodied) by long takes and gruelling, laborious rhythms. But there is a more concrete association, which is indicative of Sokurov in particular and his weaknesses as an artist: that is the philosophical mysticism with which both talk of their works and lives.

Tarkovsky’s own Stalker, which screened at the AV Festival the night before, is deeply and deliberately ambiguous with regard to notions of a human condition and, by extension, his film carries an ambivalence towards the political history of his country. It is in this way that Sokurov has continued Tarkovsky’s latter-day legacy, and his art is worse off for it. If the director was right to note in The Art of Time that there can be no space without time, the formal considerations become limited without also a view to subject matter: in response to Russian Ark in particular, we ought to note that there can be no history without politics. And political history is not confined to the museums and palaces of the ruling privileged.

As such, the film’s endurance lies in the extent to which its conceptual and formal experimentations remain novel. But for all its design and impression, the film is prone frankly to bouts of irritation, with Sokurov’s running commentary making it resemble a kind of high art Eurovision song contest without the singing. And to what does his narration refer? In terms of on-screen incident, very little: ultimately, the film is a humourless, characterless and mannerist view of Russia and its history.