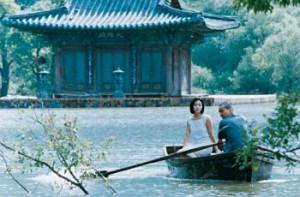 It might be difficult to come out of Spring, Summer, Autumn, Winter… and Spring (Bom yeoreum gaeul gyeoul geurigo bom, 2003) able to shirk a) its cutesy, aestheticised emotionalism, and b) the suspicion that its four-part-with-coda structure was determined by a narrative gimmick, that in which life’s phases are made analagous to the year’s seasons. Because the film as a whole unfolds according to its titular chapters, it quickly becomes tedious.

The film charts the isolated existence of a Buddhist monk and his apprentice, living in a monastery floating on an untouched lake. As a boy, the apprentice takes pleasure in tying a rock each to a fish, a frog and a snake; watched on by his teacher, he is sent the next day to free the creatures, a heavy stone attached to his own back, and is told by his master that should any of them have died, his responsibility for their deaths will live with him for the rest of his life. Finding the fish dead, the boy is moved to tears.

Summer is announced, and with it, a new phase in the same apprentice’s life: as a teenager, he falls for a young woman who visits the monastery with her mother in the hope of being healed of an unspecified ailment. Behind the master’s back, the two teenagers have sex in the nearby woods. Outraged to discover their ongoing deed, the master sends the girl – cured of her fever – away. Dismayed, the apprentice leaves during the night and goes after her. In autumn some years later, the apprentice returns, having jealously murdered his love; detectives investigating the crime follow him there. And so on, and so forth…

Filmed at Jusan Pond, an artificial creation in Cheongsong County, South Korea, shooting took place over 22 days in the course of a year, after the erection of the hermitage on which the film’s action takes place. The location provides the film its serene beauty. Captured during all seasons, its visual qualities are undoubtable; in the background of otherwise static interior shots, the outside world moves gently by as the monastery floats its course. The wintry chapter in particular is impressive, with the lake frozen completely over. 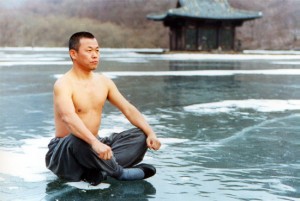 The film seems mannered, even twee. “Of course,” it seems to argue, “this incident is an inevitable part of life.” Its particulars all stand as nebulous phenomena. The older monk, infallible, doubles as the film’s moral voice. His teachings are the film’s unquestioning own. Desire leads to jealousy, jealousy to murder; the human condition is handsomely equipped to destroy itself. Self-destruction is unavoidable – we must accept it, and in turn appreciate the cleansed sense of wisdom our faults bring us.

Life, death, karma, rebirth; these are the broad themes painted behind the more material depiction of the mental and physical discipline required of an isolated spiritual commitment. Towards the film’s end, a laboured climb to the top of a mountain is accompanied by a beautiful song that overpowers everything else on the soundtrack. In the final two segments, the director Kim Ki-duk places himself at the centre of his own film and shows us his physical agility. One waits impatiently for the whole circle of life to complete itself.