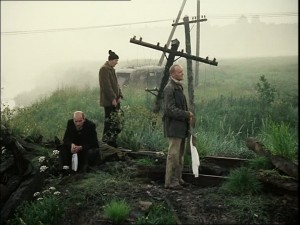 Stalker (1979), adapted by Boris and Arkady Strugatsky from their own 1971 novel, Roadside Picnic, was released the same year as Apocalypse Now and is a similarly epic journey into man’s – or three men’s – heart of darkness. It was also director Andrei Tarkovsky‘s second foray into science fiction, following 1972’s Solaris.

Like some elusive hybrid of high poetry and a more philosophical Wizard of Oz, the film begins in the abandoned gloom of a sparsely populated industrial area (it was shot in and around Tallinn, Estonia) captured in a crisp sepia that heightens the sobriety of the mise-en-scène and the languorous pace with which its imagery unfolds.

In a universe where one’s profession doubles in existential fashion as one’s name, Stalker (Aleksander Kaydanovsky) bids farewell to his estranged wife and crippled daughter and meets Writer (Anatoly Solonitsyn) and Philosopher (Nikolai Grinko), both of whom verbally prod one another, each seeing enough of himself in the other to speculate with confidence about his concealed insecurities.

For a fee, Stalker has agreed to escort the pair into and across the impenetrable and unnavigable Zone, a mysterious, forbidden place whose apparent desolation extends that of the surrounding and preceding area but for its untouched greenery, whose colour is presented as some revelatory contrast following a lengthy sequence (like that of endless motorways that divides earth and outer space in Solaris), in which the three men travel silently on a speeder, their reflective solitude denoted by the close-ups in which their single, disparate profiles are underscored by both Eduard Artemyev‘s score and the hypnotic punctuations of the railway track below.

Episodic in that road-movie way, the film draws attention to the meandering qualities of its narrative as soon as its eponymous character insists that his two pilgrims cannot travel direct to the Room that lies at the heart of the Zone, even though they can see it 400 metres away before them. Part of the film’s strangeness is its tension between Stalker’s repeated warning that the Zone’s landscape is forever changing, and the visually mundane stasis of its environment – indeed, it is increasingly unclear how the characters end up from one location to the next. 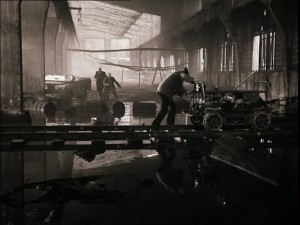 In the Room itself there is contained the mysterious power to fulfil any visitors’ desires. Upon making it there intact, however, Writer and Philosopher become suspicious of it and the man who has led them there: is Stalker merely exploiting others’ need for hope and belief in a world that long ago declared God dead and more recently showed its capacity for evil in the name of rational science? This leads to the further realisation that in fulfilling men’s desires, the Room of course brings to fruition not only the wishes explicitly voiced, but those inner, darker truths that have burrowed themselves deep within the unconscious to protect one against a tyrannical state and the social paranoia extending from it.

Is Stalker Tarkovksky’s allegory for the failed soviet system? In his title character – who shares his first four letters with Stalin – does he see a disingenuous charmer who dupes his fellow men with mysticism and bad faith? As Stalker’s two fellow travellers quarrel over what to do with the Room, one of them remarks that, in unleashing upon the world “purer” thoughts unknown even to them, the Room exposes man’s most intuitive, instinctive – in a word, most “natural” – qualities; these qualities, of course, are the evils that civil society kids itself into thinking it has conquered: selfishness, avarice, self-preservationism and so on.

As a product of a Russian intellectual who lived through the years of communism’s betrayal by the Stalinist bureaucracy, Stalker‘s implicit reservations come as no surprise. With communism apparently proving itself to be doomed from the outset, with faults springing from its fundamentals, how else to conclude but with an image of man as a figure of inherent greed?

But some ambiguity remains: at one point earlier in the film, one character declares his preference for weakness, as found in the sensitivity of a baby, over the cold and hardened wisdom of a human mind by the time of its death. If humans are born sensitive to their own and others’ imperfections, however, then one reasonably suspects that Philosopher and Writer have acquired such distrust of mental infallibility only though their social experience.

Such concrete experience, particular to Russian and eastern European history, is possibly presented in the film as a universal, which would be far removed from the sincerity and sensitivity with which Tarkovsky dealt with history in Ivan’s Childhood (1962) and Andrei Rublev (1966). It would be made all the more disappointing in Stalker because of its director’s undeniable strength at still creating remarkably absorbing images heading into his final two features, 1983’s Nostalgia and 1986’s The Sacrifice, which were both made in exile.

But perhaps, following the navel-gazing efforts of his self-probing autobiographical cinepoem Mirror (1974), Tarkovsky suffered some sort of intellectual and artistic confusion in turning once more to the wider world, albeit through allegory. Perhaps as a result he wanted it both ways: for all the philosophised cynicism, in the film’s final moments, he grants Stalker’s household and his film’s audience with a seeming miracle after all… or does he? At any rate, if this is to be taken as the director’s suggested response to totalitarianism, then such reductionism is here at least as fascinating as it is helpless.