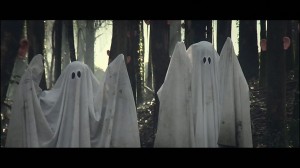 The second film of the AV Festival shot by Catalan cinematographer Eduard Grau – the first was Albert Serra’s Honour of the Knights (Quixotic) – this directorial feature debut (2010) from Grau and Serra’s fellow Catalonian Sergio Caballero follows two ghosts, who wish to rejoin the living world, on a meandering, half-hearted pilgrimage to Santiago de Compostela – the object of desire in Luis Buñuel’s The Milky Way (1969). From the moment at which its two protagonists dissolve into frame to the spoken end credits, the film is an utter hoot.

Our ghosts resemble two budgetless Halloween partygoers who’ve taken the wrong turn off. Engulfing the unseen actors beneath them, the gigantic white sheets have an all-too-noticeable physicality, becoming increasingly dirtied as the pair make their way through the harsh wilds. Voiced by Russian actors, they seem to parody the soul-searching that marked Tarkovsky’s confused pilgrimage at the beginning of the AV Festival.

Caballero’s protagonists’ journey, the practical result of a semi-improvised shoot, is shot with such pictorial care that its deadpan silliness is as finally winning as it is initially curious. Often beautiful in themselves, individual compositions gather hilarity when juxtaposed. Without warning or explanation, the duo’s steed – not unlike that of Serra’s Quixote – turns into a stuffed toy, its head manically swinging as one of its sheeted riders feeds it, while the other tends to a fire.

The inclusion of moments like this seems less a comment on narrative artifice than an all-out faith in how humorous and weird imagery can be. It’s refreshing to watch something so unapologetically fun, so uncompromised with regard to narrative logic, which doesn’t also shout to be taken seriously. Such a balance can be a difficult one, and Caballero and co. seem to achieve it with a unique brand of take-it-or-leave-it artsy self-pleasure – which isn’t the same as being self-serious. Monty Python and Jodorowsky are mentioned as possible influences; in terms of probably coincidental similiarities, we might throw The Mighty Boosh in there too.

Final meanings are resisted, of course. The significance of a scene in which the ghosts wander through a field of talking trees, to which are attached plastic human ears, is seemingly unfathomable. (A high-pitched drone sends the ghosts into tortured agitation; afterwards, they hold their “hands” to the air in submission.) It goes to show how far one’s patience can happily be stretched when the basic aesthetic by which proceedings unfold is so seductive. 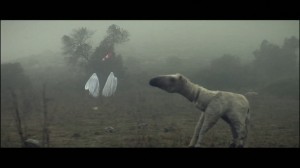 Finisterrae‘s strengths are tonal. Part of what makes its liberated and playful narrative so mysterious are the few moments of comparative solemnity. Like celebratory asides, which recall those revelatory equivalents in which Tarkovsky shoots actual paintings in Andrei Rublev (1966), Grau’s camera probes in awe the silent, mid-action stillness of taxidermied wolves, whose lifelike presence puts the ghosts’ pathetic model horse to shame.

Order, however, is restored: the quieting aside is dutifully interrupted by a split-screen effect, which introduces a red-curtained Lynchian room, in which a female ghost beckons one of our protagonists across the threshold by lifting her sheet and getting her tits out. Immediately after, the tone is complicated further: as one of the principal ghosts produces music by playing a snapped-off branch as if it were a flute, enchanted and enchanting deer watch on. One of them comes closer, curious. For a brief moment, it seems to share an understanding with the spirit in a kind of pantheistic harmony.

A melancholy seems to inhabit the leading duo. Wandering over a distant horizon at night, one of them states that he wants to go fishing the following day. “Okay,” his companion replies, “I’ll take the opportunity to go and see my friends.” The other responds with lament, “But you don’t have any friends.” Caballero allows enough time for us to digest the poignant turn before cutting to the next image, hilarious in its presentation of one ghost helping a self-pitying other: pushing his fellow pilgrim in a wheelchair, the other says, “You’ll be alright here. Relax.”

Imbuing these loveable neurotics with a strangely human fallibility without the means of facial nuance, Finisterrae shows considerable intelligence in a unique way in its forty-something director. Splendid.