Edinburgh Int’l Film Festival 2013: The Colour of the Chameleon 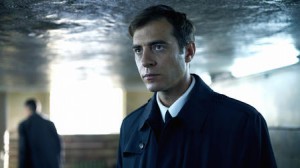 Taking on chameleonic qualities, The Colour of the Chameleon (Tsvetat na Hameleona) is a smart entry into the espionage thriller while also being something of a semi-satiric deconstruction of the genre as well as of the political corruption that pervades the post-Soviet territories. Its attention to detail and penchant for cumulative impact demand patience; like belatedly cunning protagonist Batko Stamenov (Ruscen Vidinliev), the film keeps its wider points half-hidden under a deceptively light touch. Slickly made, in aesthetic terms it doesn’t immediately strike one as particularly invested in history or in real life.

The fiction feature directorial debut of Emil Christov and adapted by Vladislov Todorov from his own novel The Zincograph (referenced in the film as the subject of an underground revolutionary book club), The Colour of the Chameleon begins in 1989 Sofia, before the fall of communism, where Stamenov is recruited as a secret police informant by Captain Mliakov (Rousy Chanev). Self-codenamed “Marzipan”, Batko is tasked with penetrating an enemy cell within a group of revolutionary students while working as an assistant in an etching print factory, and embraces his duties with diligence. When he is prematurely dismissed of his command due to a misunderstanding, however, Batko is left with a battered ego and a sense of loss.

Two years later, following the fall of communism, Batko feigns identities as KGB, CIA and MI6 agents and begins to recruit his own spies, spinning an intricate web of obliviously fake espionage cells in order to machinate vengeance upon Mliakov and to undo the political regime – corrupt and inept in equal measure – that has arisen from the ashes of the old system… To say more would be to spoil a film that revels in the fun to be gained from handling grand gestures and fancier whimsies alike; an interest in the workings of espionage fiction might be of crucial assistance in keeping up with a plot that also includes apparently superfluous details.

Said details include Batko’s childhood as an orphan, flashbacks to which reveal his pre-pubescent discovery of and curiosity with onanism (“a step away from epilepsy,” his overbearing aunt warns). It’s difficult to see how these elements figure into the overall story, but it’s possible that Batko’s ongoing fixation with sexual pleasures – shot with a kind of macabre humour by Krum Rodriguez – are meant as a kind of rebuke (or rather logical mirror-image) of James Bond, whose own background as an orphan and misogyny as an adult are presented and accepted unproblematically.

Whether this extra baggage is cumbersome or enlightening is down to personal preference – to my mind, the film felt half an hour too long. But then, just as its title comes from a line spoken with reference to the colour of “the sky above the city”, this is a suitably messy film set at a point in history when both politico-economic regimes bent over backwards to distinguish themselves from one another, but who were later revealed to be bedpals all along.