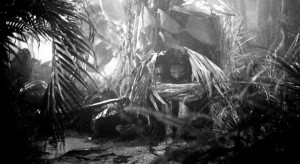 Independencia (2009) takes as its title the Spanish word for “independence”. Set on an island in the Philippines from the late 1890s onwards, the film covers two generations of a small family unit – mother (Tetchie Agbayani) and son (Sid Lucero), then, years later, son and lover (Alessandro de Rossi) with young boy (Mike Aguilos) – as they retreat from the invading Americans into the jungle, thereby creating the conditions for their own sustenance and, presumably, their independence.

Shot in a studio, the film’s environment is entirely manufactured: painted backdrops are seen through economically framed trees, whose resulting density is deceptive; birds fly through the cluttered yet precise specified from behind the camera, clearly let free at controlled moments; sunlight and its consequent shadows are given by specific lighting; rain, wind and other elemental phenomena are machine-controlled.

Though complemented by a rich maximalism of sound effects and operatic score, the visual component of the film lovingly recreates the silent cinema made in the USA at the time of its own imperialist invasion of the Philippines: a critique by means of ironic pastiche, with cinematographer Jeanne Lapoirie‘s flickering shutter drawing attention to the means by which historical truth is filtered by a propagandistic industry.

As the family escapes ahead of its own re-colonisation (the Philippines was at the time colonised by the Spanish), the film presents independence as something primordial; the strength of an anti-colonial struggle lies in the extent to which it can return to a pre-colonial existence. This ties the film’s own politics to a kind of primitive nationalism, magnified by a nostalgia for something that is materially irretrievable if not outright illusory. Informed by retrospect, the film’s makers looks to a past in the full knowledge of the repressive, murderous regimes in place since 1945, after the Philippines’ declared independence.

This contradiction, between emancipation and nationalism, lies at the centre of any post-colonial struggle. Unfortunately, Independencia doesn’t sufficiently get to grips with such complexities, much less provide a way beyond them. What, after all, is a national struggle confronting an imperialist presence based on if not nationalism? 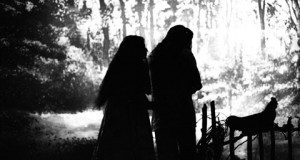 The identity politics perpetuated by nationalist revolutions is dangerously insular: we might make reference here to the Third Cinema that emerged from 1960s Latin America, whose own revolutions were short-lived precisely because of their petty bourgeois foundations. The nationalism of the latter made any emancipatory effort irreconcilably removed from a socialist movement; just as the progressive politics gave way to Stalinism, Third Cinema itself fizzled out – as the capitalism of post-colonial countries advanced, so too did their film industries, which resulted in the filmmakers running the risk of making a virtue of previous necessities; their artistic outlook, determined no doubt by their politics, was fatally narrow.

Directed by the relatively young Raya Martin, Independencia shows evidence of the same problems. Sincere in its concerns, the film nevertheless reduces the political emancipation of the Filipino people – an emormous task – to a curiously insipid tale of survival. Utilising a stereotypical symbolism, it suggests that De Rossi’s native is pregnant as the result of a rape; the child, brought up by her and Lucero in the jungle, is pale-skinned. Orphaned towards the end of the film, the boy seemingly annihilates himself – to nature’s collective lament. There’s a kind of fatalism at work here, arising presumably from its makers’ legitimate outrage but political confusion (Ramon Sarmiento co-scripts with Martin). A deeper, more thorough historical perspective is required.

Beautiful to look at, the film’s aesthetic enthralls, but its function is limited; without a genuinely worked through narrative, it becomes finally distracting and self-defeating – in short, problematic in itself. With this, the second entry in an ongoing series of films tracing the history of his own country – following 2005’s A Short Film About Indio Nacional – however, Martin shows himself to be a talented director keen to engage in the complexities that comprise the Philippines’ development. That, at the least, is a commendable start; one hopes he is able to undergo some artistic maturation so that he can strengthen his craftsmanship and match it with a fuller understanding.