This is the third in a series of five editorials on the AV Festival’s Slow Cinema Weekend, which ran March 8-11. [Part 1; Part 2] 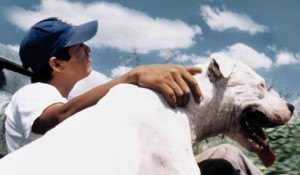 Progressing from a kind of day-in-the-life cine-poem through to a fully-blown homage to films and the cinemas in which they are exhibited, by way of a genuinely haunting murder mystery, Argentine Lisandro Alonso‘s first three feature films comprise a triptych as distinct as any other. Rich in colour and vivid in sound, the films carry an unsettling, intangible energy that lingers long after their pulsatingly soundtracked end credits roll.

La Libertad (2001) begins and ends with a topless Misael (Misael Saavedra), fire-lit at night. The shots bookend a near-wordless portrayal of Misael’s day as a lumberjack, a lone creature in a fiercely green Argentine forest. As such, the film is situated somewhere between instructional documentary and imagist experiment.

Close-ups of Misael’s axe hitting the bottom of a tree trunk with precision and rhythm foreground the gruelling extent of his labour; the surrounding ambience, consisting of fly-buzzes and bird-chirps, evokes a ceaseless heat, dense in its oppressive atmosphere.

Misael has a break. The understatement with which we observe his downtime allows an intrusion of the mildly surreal, as Latin American hip hop blows out of a radio, unexpected to us but routine to this solitary listener enjoying lunch before he retires for a siesta. Following a dizzying, dream-like aside in which the camera pans and swirls through an ominous, endless forest, Misael emerges in fresh clothes, his strength renewed.

But for one shot from the back of a jeep – in which we become fixated on a dog’s tongue, which droops out of its mouth as if in desperate need of some fluid – La Libertad doesn’t quite hold its images for as long as other films that might fall into what we’ve been calling “slow cinema”. Indeed, if the point here is similar to that of Sharon Lockhart’s Double Tide, then the film’s aesthetic delivery is proof that there are multiple and equally legitimate ways in which the monotony of one’s daily toil can be shaped or viewed.

Scenes come and go here: they start late and end early, often in mid-action. Editorially, La Libertad matches its character’s own need to fragment his work down into manageable chunks. Like its locale, the film seems at a spatial and temporal remove from the rhythms of a city life.

Out of unsensationalised necessity, however, Alonso draws a more suggestive edge. The orange-red flickering calm with which the film starts and concludes is interrupted by flashes of a far-off lightning storm; thunder rumbles seconds after. The latter of these shots especially turns into a sort of mischievious provocation, as Misael looks almost direct to camera, chewing matter-of-factly on the insides of an armadillo he has caught, killed and cooked himself.

Unhappy witnesses to the details of this latter task, we find a parallel is put pointedly to us, between the way in which Misael batters the creature’s head in and skins it, and the way he does likewise to a tree, so that he can chop it down to a commodity and sell it for next to nothing. The end credits remind us the film’s title translates as “freedom” – is its meaning ironic or literal? 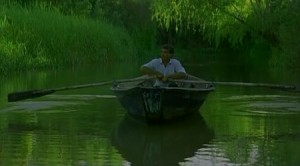 Likewise, Los muertos (The Dead, 2004) plays things the right side of arthouse ambiguity, presenting us with another brooding man of few words named after the non-actor playing him. Vargas (Argentino Vargas) spends the last two days of a prison sentence saying goodbyes and absorbing jealous jibes.

Upon his official release, he sets off in search of his now-adult daughter. With what little money he has, he buys her a blouse and some sweets. He nabs a lift on the back of a truck. Acquires a small boat in which he strolls gently down a river into the heart of a thick jungle.

Serenity may once more be the order of the day here, but for the sense of clinically dished doom that has permeated the whole thing from that opening, unexplained shot in which a camera swirls about a jungle searching for a subject on which to focus, before concluding disquietingly on the bloody corpses of two children.

Vargas’s incredible performance drives the film. His enigma rests on subversion: too mild-mannered to be an authentic convict, he seems too detached to be able to reintegrate back into society. And yet, from the off, the film makes him capable of anything, cutting without warning from roadside tranquillity to a shot of him receiving a blow-job from a prostitute; cutting back to her kids playing on the porch, we return to Vargas fucking the prostitute with a certain, self-interested toughness.

Any trauma is contained; violence occurs in inexplicable eruptions. Meanwhile, Vargas’s face is impenetrable. “Is it true that you killed your brothers?” someone asks. “I don’t remember,” he replies. But there’s something very brutal about bodily functions here.

Building upon those scenes in La Libertad in which Misael crouches to take a shit or bashes in an armadillo’s head, Alonso has us watch in awe as Vargas retrieves large lumps of honeycomb after fearlessly raiding a bee hive, and then, later in the film, backs up his vessel so that he can step aland and cut a goat’s throat, ending its life in seconds.

Lifting it into the boat with him – its lifeless head falling at a hideous angle to the rest of its body – Vargas guts the creature in an unedited take, the ruthless efficiency of his skill quite evident. The physicality of such scenes is extraordinary, and they allow Alonso to accumulate an unease that’s so beautifully crafted that you find yourself floored when Flormaleva‘s magnificent, aggressive guitar cuts the film’s mysterious final shot short. 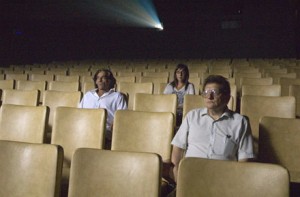 Vargas and Saavedra both return for Alonso’s third feature, Fantasma (2006), a 63-minute hymn to cinema-going in which the star of Los muertos finds himself wandering through the multiple storeys of Buenos Aires’s Teatro San Martín complex, which houses a cinema that is premiering the 2004 film.

Handsomely shot by Lucio Bonelli – who replaces previous cinematographer Cobi Migliora – this self-reflexive work sees Vargas seemingly trapped and lost within the building’s formal, rigid interior, far removed from the dense jungles of Los muertos. The non-actor’s deadpan prowl and the way in which he flicks back his hair take on a quiet hilarity. In the preceding two films, protagonists undertook an A-B journey that hinted at a cyclical ritual; here, the circles are literal, as characters come and go, briefly inhabiting and re-inhabiting the same spaces, from the bright but sparse lobby to the dingy oppression of the building’s many stairwells, staff corridors and backrooms.

As if to emphasise the change in location, from rural calm to capital city modernity, Alonso cranks up the volume to give the building a palpably pregnant ambience, filling it with an ever-present clamour consisting of elevator drones, air-con hums, beeping watches, alarms, unanswered telephones, door creaks, a barking dog, the whir of a film projector, the unique timbre of a film-within-the-film – Los muertos itself vying for the attention of whomever should pass by long enough to notice it’s playing.

Melancholic souls brought together for a variety of reasons, these characters struggle to connect with one another and their environment. Saavedra, the woodcutter from Alonso’s feature debut, searches a fridge in some kind of abandoned art studio; ignoring the giant bust of Marx, he cracks open a bottle of champagne and sits down to watch the television, on which airs a programming documenting how to kill a stingray. The small screen trumps the big.

The film isn’t just pretty images and impressive sounds. Some mystery is retained. Its opening shot is of Vargas seemingly about to close up a cobblers; as we look from the outside in, he walks toward camera and looks from the inside out, past the frame, a red high heel in his hand. Alonso cuts to black and some music plays for some time; only later, after the first sequence inside the Teatro San Martín itself, does a title credit appear – that black “intermission” goes unexplained. It might be the director embracing the fact that his aesthetic, growing in style, isn’t everyone’s cup of tea – and the prologue seems to be his way of adding a disclaimer to that end.

If wordless homages to architectural spaces is your thing, though – the film seems lovingly indebted to Ming-liang Tsai’s Goodbye, Dragon Inn (2003) – this might be Alonso’s finest film: a deceptive, pleasant, subtle gem for which the medium is trimmed to absorbing sights and dazzling sounds so as to carry a narrative about itself, and how we receive it.