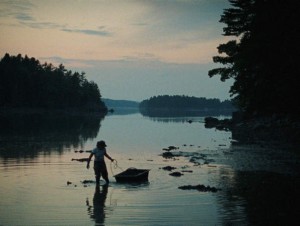 When Sharon Lockhart couldn’t be present for the AV Festival 2012’s screening of her film Double Tide, friend and sometimes collaborator James Benning – whose beguiling film Nightfall screened the previous day – stepped in to provide a brief introduction. Double Tide is about “personal autonomy”, he told the audience, about having control over one’s sustenance and circumstances. More specifically, Lockhart’s film presents two long takes of the mudflats of coastal Maine during the brief period of summer in which the tide is low enough for Jen Casad to dig for clams twice a day – at dawn and at dusk.

There are two ways to go about making a film of this kind. The first is the more straightforward – or familiar – route, by which the subject matter is contextualised and then illustrated, amounting to something like an advertisement or even exposé. The second is more experiential, trimming the piece itself of expository context or narrative manipulation, documenting the subject matter in as spatially and temporally unobtrusive manner as possible. The hope with the latter approach is to emphasise the length and thereby physical effort involved in clam digging, to place viewers temporally alongside or within the process (as far as the spatial confines of the cinema allow), to facilitate a contemplation that’s more participatory than merely consumptive.

Suitably then, the film labours its point – the sheer physicality and presumed willpower that Casad embodies – in two ways: visually, both takes are uninterrupted, with attention brought to the camera’s adamant, unmoving position the further its subject moves from it; and aurally, the unique squelches each time Casad digs her hand into the mud form an effective ode to the monotony – and perhaps even therapy – of her toil.

Lockhart’s film thoroughly emphasises humans’ relationship to their material surroundings, and how we as a species adapt to an environment by changing it, through labour. Entering against a haunting grey canvas of fog, Casad cuts a solitary but dogged figure, slowly but stubbornly transforming the mud, her growing collection of clams coincidentally signified by the gradually lifting fog and the suddenly discernible bay behind her. In the second take, the camera is noticeably closer to the action, though the frame no more busy, the pink hue of dusk providing a hypnotic backdrop as the film steadily moves towards a resolution imposed upon it by an abrupt cut to black.

Labour and the consequent transformation of one’s environment are presented here as natural phenomena, intrinsically linked to one another in an inevitable dialectical process. It’s refreshing that art can document such processes without becoming some sentimental eco-statement. This is, after all, an industry of sorts, pared down to its most basic elements: the film provides a visually minimalist base and, by its conclusion, the landscape untouched at its beginning has been necessarily altered in order to provide one with a means of survival amidst an implied, far-off superstructure.

Prior to the film, James Benning informed us of two things that amplified the experience of watching it. One was its technical information: Lockhart shot the film on 16mm, so that every ten minutes or so she would have to change reels – and yet, each of the two takes in the film give the illusion of not being interrupted (I counted one dissolve in the second take; otherwise, remarkably, the edits went unperceived). The second piece of information was that Casad is herself an artist, and digs clams with her left hand to preserve the talents in her right – though at a certain point in the film, she begins to briefly dig with her right to ease the strain on the other. In this way, Lockhart’s quiet, reflective piece doubles as a self-reflexive document on how an artist might acquire her daily bread.