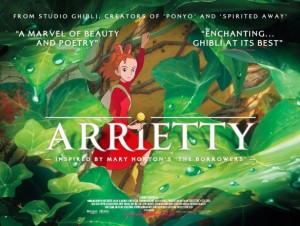 After last weeks insightful editorial about Studio Ghibli, it’s creator and it’s history, we follow up with a look at ‘ARRIETTY’, the latest offering from Hayao Miyazaki’s team. Although this time Hiromasa Yonebayashi, makes his directorial début, with Miyazaki acting as script writer and animation consultant.

‘Arrietty’ is based on the book ‘The Borrowers’ by English author Mary Norton. The film sticks quite closely to the book in many aspects but is reinterpreted for the big screen in Studio Ghibli’s inimitable style. From the opening shot we are treated to the warmth, vibrancy and detail which has made many people across the world and of all ages fall in love with Studio Ghibli’s releases.

The view into this close-up small scale existence is captured perfectly in the animation’s style. The depth of layers in each scene draws you deep into the borrowers world and thereby the story itself.
Unexpectedly we are treated to a glimpse of the ‘Borrowers’ very early on in the film, when Arrietty is spotted by Sho, a boy arriving at the house. This disappointed me somewhat, as I felt they hadn’t built up the anticipation of how the borrowers could live amongst us but never be seen. 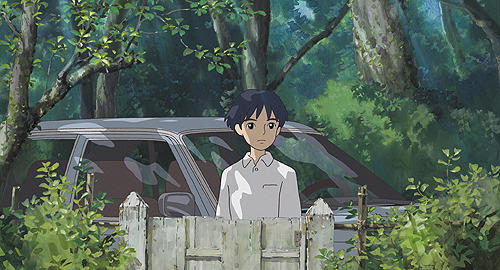 There are many clever devices used to really bring home the fact that the ‘Borrowers’ are no more that 10 cm tall. One scene which had great effect was when Arrietty goes on a borrowing expedition with her father for the first time and we see her view over the dark and vast kitchen by night. As Arrietty looks around the room and at it’s contents we hear the noises which we would hear in the daytime when the humans are around, only this is night time, the time when the borrowers emerge.

The use of everyday human objects by the borrowers for other purposes must have been great fun for writers to dream up, one great scene shows Arrietty’s father Pod using double sided tape to climb up a table leg.
Sho, as we later learn, is sick and is awaiting an operation. I found this idea rather reminiscent of ‘The Secret Garden’.He has seen the borrowers and now feels that he must protect them, giving him strength and courage to face his own problems. 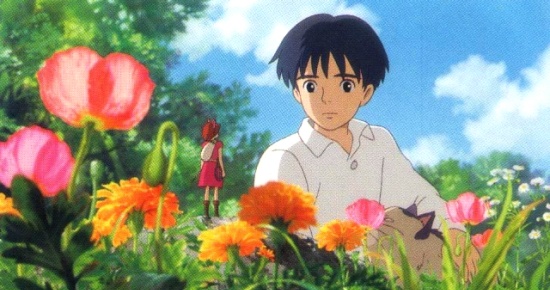 Arrietty, like many of Ghibli’s releases is sure to appeal to all viewers, as the story is told with a maturity that doesn’t alienate adults but has enough magic and intrigue to keep young children captivated. There appear to be quite a few underlying messages touched on in this film, from love and friendship to an ecological message about the effects humans have on the world around them. These however do not detract from what is a timeless classic of a story that has and will be enjoyed by generations. 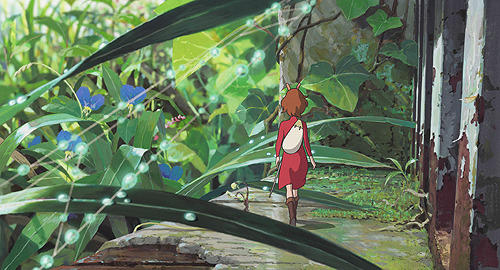 The use of lighting effects, the amazing sense of scale and contrast between the borrower and the human worlds and also the the attention to detail are what lift this film from being straight forward cartoon version of the fantasy book into a classic animé. It comes as no surprise that ‘Arrietty’ won the Animation of the Year at the latest 34th Japan Academy Prizes in Tokyo.

The voice cast for the version released in England features Saoirse Ronan (Lovely Bones, City of Ember), Tom Holland (Billy Elliot stage show), Olivia Colman (Peep Show, Green Wing) and Mark Strong (RocknRolla, Kick Ass). Ghilbli fans in the USA will have to wait until 2012 for their version to be released with a completely different voice cast.