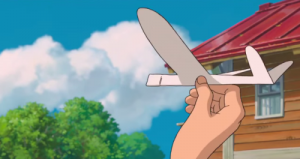 “Be careful, this may be a dream but you can still lose your head!”

Hayao Miyazaki is a magician of animation. He creates lyrical and poetic cinema that brings together the fantastical, a love of nature and real life with ease wrapped harmoniously in an unfailingly inventive narrative. He has created characters that will remain in the consciousness for those to follow and in the hearts for those who have revelled in his talents over many decades. To think that this is his finale, his swan song, makes the whole experience more emotional as you’ll reflect on his past works during this film.

The Wind Rises slowly gets underneath your skin without realising. It feels simplistic at first but that is part of its disarming charm. The narrative is stripped back so that at its roots it is about the struggles of Jiro Horikoshi trying to realise his aviation dreams but then you get entangled in the greater message of how we should realise our own desires and to what ends we are willing to go to achieve them. It’s as much about the absence of beauty through ruination as it is about a single man’s vision. 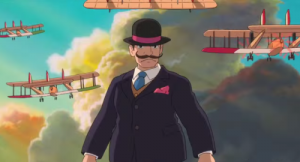 Initially in Jiro Horikoshi’s youth he wants to become a pilot and fly freely in the sky but he realises that it’s not possible as he has corrected vision but instead it would be best for him to become an engineer. It’s better to build planes. This is all told to him by the apparition of Caproni, an Italian plane designer, who appears to him in his dreams.

The animation adds to the poignancy of the films juxtaposition of beauty and war. It creates a beast out of nature which feels like a living character of its own accord. The great Kanto earthquake is abhorrent as swarms of humanity are left in its wake and the deftness of the blades of grass gently swaying as the invisible wind wafts through them is mesmerising. It adds an extra layer to an already impressive piece of art. 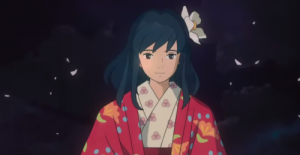 The film goes on to show how he becomes chief engineer of Mitsubishi. He finds love in the form of Naoko who plays a key part in his personal journey. It would be slightly rushed at this point if that’s all this film was about because it doesn’t allow enough time for it to develop fully. However, this romantic story alone would be enough to create a touching film but the whole thing evolves when Jiro’s ambition is met with the Empire of Japan’s need for weapons of war. 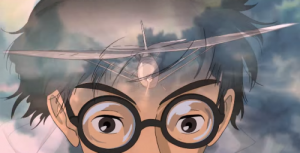 Here is where the crux of the story comes about when Jiro is faced with the moral dilemma of wanting to create the perfect aircraft and realise his life’s dream but at the expense of them being used to bomb whole clusters of villages, towns and cities. The film brushes over this slightly but it is by no means less devastating and upon reflection I love the subtlety of Miyazaki’s approach on the subject and how it’s not the sole focus of his direction.

I have been purposely vague about the plot or anything beyond an initial glimpse of the premise for this movie because I urge you not to be pinned down by the semantics but to get lost in the sensuality of it all and let Hayao Miyazaki wash his mastery over you one last time.

I leave you with these words from the real Jiro Hirokoshi:

“For the first time, I really saw the effects of the incendiary raids on Nagoya. The city is a wasteland, charred and unspeakably desolate. My former factory is a ghostly, steel-ribbed wreck, shattered by bombs and torn apart by the dispersal crews. It is hard to believe that all this is true. I knew that soon I would be well. Strangely, though, I had little desire to return to work. The impression of the shattered city and the wrecked factories will not leave me”