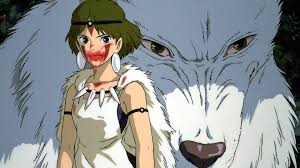 Princess Mononoke is anime through and through. Anime is just the Japanese word for animation, but the term has come to be associated with a few genre traditions, and Mononoke is crammed full of them. It’s got the character animation that is distinctive of Japan – low on detail, with exaggerated expressions to compensate – that is offset by lushly detailed landscapes that look incredible on Blu-Ray. It’s got a sense of weirdness that Hollywood wouldn’t go near, complete with decapitated Gods, exploding pigs and demonic arms. It’s got a third act that goes utterly insane (c.f. Akira, Origins, Paprika, any anime ever). It’s got a tone that is uniquely, undeniably Japanese. So it’s anime through and through but for those willing to embrace it in all its cultural distinction, Studio Ghibli remain unrivalled in terms of their invention, imagination and sheer storytelling bravura.

Mononoke is narratively more complicated than most Ghibli films, telling a dizzyingly vast story of a young warrior, Ashitaka, who gets cursed trying to protect his village from a demon, so he must travel across the country to find the source of the curse. He finds an industrial town who are damaging the landscape and at war with the eponymous royal who is trying to protect the spirits of the forest and, most particularly, the guardian God who marches, stag-like, through the secret places, bringing life with each footstep. Ashitaka finds himself drawn to the wolf-princess who rides giant white lupine gods around the countryside, but she is far more hostile. Allegiances and motivations come crashing together from every angle in a finale that is mind-boggling, beautiful and bonkers.

Thematically, it’s more complicated, too. As with many Ghibli films, one of the main concerns is the environment, and the film is shot through with the tension of humanity’s relationship with nature, humming like a taut wire being tentatively strummed. Yet it’s not an eco-rant, it understands that people must exist, and they need nature to do that. It’s a drama about how much you take, and why. Yet it’s also about the destructive power of war, and the violence of nature and people’s responsibility to each other. It’s a meaty, rich script with loads to chew on.

The biggest draw, perhaps, is the action. With battle sequences that echo Kurosawa and shame the glut of destructive blockbusters that have bored us on the big screen of late, Princess Mononoke is consistently thrilling right up until a final act falter that drags out a little too long. It’s surprisingly violent, edited with clarity and animated, as ever, with a vibrant imagination that makes this a cut above most other films.

Princess Mononoke is out now.