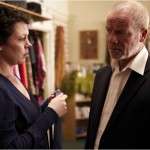 Tyrannosaur is a brutal account of one man’s constant battle with the rage that consumes his life. Joseph, an alcoholic widower, is shown committing a series of violent acts which lead to an even greater sense of loneliness within him. His only solace comes in the form of Hannah, a religious charity shop worker, who also needs a shoulder to cry on. The film is Paddy Considine’s first feature film which is an extended version of a short he made with the same basic plot called ‘Dog Altogether’ (this film is also included on the DVD and Blu-ray).

The animalistic nature of violence is a prominent theme in Tyrannosaur. The title itself references primitivism and the use of dogs within the film also gives the impression that the characters behave like animals. Considine captures these moments of madness admirably in his work and the story is as gritty as it can possibly be – sometimes delving so far into the depths of the unpleasant it is almost too much to take. Peter Mullan’s deep, gravelly voice accompanies the coarseness of the film as a whole. The primitive nature of all the characters is particularly present in their verbal communication which is often as basic as their need to settle all disputes violently. However, Hannah’s polite nature is also punished when the film shifts its focus to the troubles she faces within her own life. It seems there is no escape within Considine’s brutal world.

Occasionally, it’s a little heavy-handed. Joseph’s breakdown after Hannah says a prayer for him makes the film seem a little too self-aware for a brief second. But the basic message that violence will only lead to more violence is prominent and true throughout. Considine lets us sit and watch Joseph’s anger boiling underneath him and the release or infrequent suppression of this; in a similar way to Yang Ik-joon’s ‘Breathless’.

Olivia Colman’s performance is brilliant – as she flits from a shy, submissive woman to a blubbering wreck on cue. And Peter Mullan gives a subtler performance but is equally as effective in portraying the right balance of emotions. Considine has expressed in interviews that his basic aim was to make a love story between Hannah and Joseph. This idea does, however, seem a little weak in the film as a whole and the characters never seem to be implied as any more than just friends. This statement also seems odd considering the constant focus on them as individuals. Nevertheless, Joseph’s losses of friends and relatives in his life give the story enough drive to make a relationship believable between two utterly broken people.

The DVD and Blu-ray also include the short film ‘Dog Altogether’ which is the original story of Joseph and plays out as a condensed version of Tyrannosaur. The focus within the short is just on Joseph and not Hannah but is equally as good. The opening of the short is also more hard-hitting than the opening to the film because there is a much more emotional moment between Joseph and his dog.

Tyrannosaur is an effective study on the nature of violence. And even if at times it tries a little too hard, it delivers some truly shocking moments; a worthy first feature-length film from Paddy Considine.