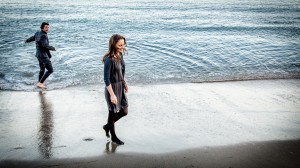 It’s not often that a recurring line spoken about the human consciousness is equally appropriate as a shallow instruction to the audience to rise from a narcoleptic slumber. Such is the anathema induced by Terrence Malick’s latest that it becomes a useful plea in more ways that it was originally envisaged.

Like many of Malick’s endeavours, this is unashamedly open about its preoccupations with depth and substance. It is a noble intention, and one worth applauding, as American cinema continues to be obsessed, and ultimately compromised, by commercial concerns. It is in this regard that it can be said that Malick docks his boat in the same harbour as David Lynch, albeit with very different aims and methods.

Unsurprisingly, Knight of Cups boasts an impressive big name cast. Christian Bale, Cate Blanchett and Natalie Portman have all cleared space in their diary to work with this formerly reclusive auteur.

The vestige of a plot can be recounted as thus; Bale takes his place as the lead protagonist, and he is required to roam the landscapes as a troubled vessel. The facets of his personality and his consciousness are represented in the form of others, whilst occasional po-faced and worthy sounding voiceover states the quandary/ies of man. In the meantime, visuals float by in a dreamlike state; weaving around the figures and dovetailing into passive shots of the elements.

It is a travesty to report that Knight of Cups is 2 hours of conjecture and little else. This is pontification without any conclusion. There is no true insight. How many shots of the canyon and water do we need before we uncover the allusion? And this begs the interesting paradox; because whilst it aims for subtlety, the repetition of its devices render it blindingly obvious. Yes, the recurrence of the submergence in water is a reference to the opaque, dense clutter of our consciousness. We get it.

There are other problems too, including ethical questions about the use of the naked female body. Quite why there is shot after shot after shot of supermodel waifs strutting around in the buff is a mystery. The point is made about his battle with lust early on, so the insistence on drip feeding this across the entire film is an unwelcome and unnecessary distraction. Maybe it’s a concession to rouse interest or fire up the frustration with the feature further.

For all of his previous plaudits, on this occasion, Malick cannot be mentioned in the same breath as such filmmakers as Tarr or Tarkovsky, and this is certainly not Bergman-worthy. It is not even Jodorowsky. In fact, speaking of the latter, even his iconoclastic and deliberately provocative The Holy Mountain offers a biting intelligence and idea underneath its bombardment of visceral, restless imagery.

Knight of Cups is feigned philosophy that has no resolution and no stance. Suggestive though it may be, it is served as a three course meal, and yet it is barely sufficient enough to be classed as a starter plate.  Don’t be fooled by the mainstream cast; this is a resolutely art house film. And a poor one at that.