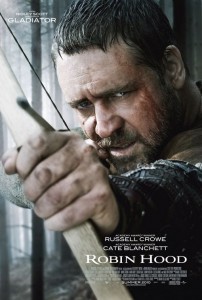 Robin Hood, Ridley Scott’s upcoming epic, is set to open the 63rd Cannes Film Festival this May. The action packed retelling of the English folklore tale has a reported budget of $130 million, proving that the French festival doesn’t just favour independent fare. Last year Disney Pixar’s Up made history by being the first animated opener, while 2006 saw money-maker The Da Vinci Code get things started.

Scott’s latest film has drawn comparisons with his previous hit Gladiator, which took home five Oscars and a heap of other awards. The two films are not only similar in their grand scale and ambition, but they also share the same leading man. Russell Crowe is to star as the famous, heroic outlaw opposite fellow Australian Cate Blanchett, who will portray Maid Marian.

The film has been in production since 2008, having been delayed by Scott due to his disappointment with the original script. Initially Crowe was signed on to play the notorious Sheriff of Nottingham in what was to be a reimagining of the character as a brave and noble champion. Deciding not to throw the baby out with the bathwater, Scott revised the film and kept Crowe attached to the project, changing the name from Nottingham to its more traditional title.

Robin Hood will premiere at Cannes on May 12th before releasing internationally two days later. Until then, why not see some of the action for yourselves: