Turning to the world of period dramas, director James Gray crafts a story of longing, loss, and the shattered dreams of those hoping for a new life in America. The Immigrant focuses upon Polish immigrant Ewa (played by the consistently excellent Marion Cotillard) and her sister Magda (Angela Sarafyan) as they arrive at Ellis Island in the 1920s, seeking shelter and a better life in the United States. When Magda is diagnosed with tuberculosis and quarantined, Ewa finds herself on the brink of deportation. She is unexpectedly rescued by the dapper Bruno (Joaquin Pheonix), a theatre producer who takes a personal interest in her case. Ewa begins working as an actress at his theater but quickly realizes that in this world, acting and prostitution go hand in hand. Caught between Bruno’s confessions of love and the desperate need to send money for her sister’s health, Ewa reluctantly begins working in the world’s oldest profession. She encounters a glimmer of hope when she meets Orlando (Jeremy Renner), an impulsive and romantic magician who promises to help her escape Bruno’s clutches. All is not what it seems, however; Ewa discovers that Orlando is Bruno’s cousin and the two share a history of jealousy and disputes over women. Desperate to flee, Ewa navigates these twisted relationships while never losing sight of her goal to reunite with her sister and seek a better life.

The Immigrant depicts a story that has been incessantly overdone in film, literature, and just about every artistic medium one can think of; everyone from Chaplin to Scorcese has been there and done that. The tale of an innocent immigrant being corrupted and finding her American Dream crumbling at her feet is far from original, and it is perhaps for this reason that the premise of the film feels disappointing. Given that the story is so cliché, expectations were high that writer-director Gray would take this traditional narrative in a different direction or explore the ethical uncertainties of the characters. Unfortunately the director largely does neither; the film follows a prescribed path in which the viewer is always ahead of the plot, easily predicting the outcome. The settings and situations in the script are so familiar in our cultural imaginary as to be rendered trite.

Where Gray could have examined the shades of morality that blur and complicate Ewa’s character, he instead lays foundations and then abandons them

entirely. For instance, he plants suggestions of the improper conduct Ewa engaged in during the voyage to America, essentially complicating her ‘pure’ persona – and then tosses them aside as unfounded. The same can be said of the Orlando character, who is designed in a tiredly recognizable vein as the suave, pencil-mustached magician. Thankfully, Bruno proves to be more complex and multi-faceted than the other protagonists; struggling between his established role as a pimp and his sincere affection for Ewa, he blurs the boundary between benevolence and immorality in a constantly fascinating manner.

The film’s saving graces are Pheonix and Cotillard’s performances, which add dimensions of complexity that would be otherwise absent in its flat characters. Cotillard’s is stunning as Ewa, her accent, mannerisms, and nervous stares perfectly evocative of the lost yet determined Polish immigrant. She shines in the scenes where her inner strength comes to the fore, in confrontations with other prostitutes or when Magda’s safety is threatened. Ever the transformative actress, this is one more glorious performance in which Cotillard seems born to play the role, despite the character’s shortcomings.  Similarly, Pheonix delivers a tour-de-force performance as the tortured theater producer, oscillating between his genuine desire to help Ewa and the financial demands imposed by looming poverty. He taps into a great vulnerability hidden by the dual masks of glamour and charm, conveying the pitfalls of masculinity he has inevitably become prey to. Watching him struggle with his self-hatred and his abusive love for Ewa is satisfying in a way that feels almost forbidden, like watching someone breakdown completely. Hypnotizing and horrifying in equal measure, Pheonix makes The Immigrant worth watching. Renner, for his part, seems out of place as the debonair ladies’ man, particularly alongside Pheonix. Though his character hardly affords him the opportunity for distinctive acting, Renner’s performance feels lackluster and repetitive. 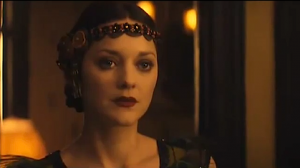 The cinematography and composition, however, also act to rescue the film from oblivion. Gray’s use of dulled colors and opaque browns, yellows, and golds instill the images with a delicate sense of history, as if the audience had stumbled across an antique photo album. Gray privileges tight framings, effectively building the tensions between characters and creating a sense of claustrophobia that envelops all of them. The city of New York thus becomes a place for disillusionment and fear, belying the myths of luxury and decadence that characterize the decade in popular culture.

Virtually serving as the antidote to The Great Gatsby’s opulence, The Immigrant takes an intimate look at the lives of desperation led by the settlers that composed the diversity of the United States’ population. Though the narrative disappointingly forgoes originality, the captivating performances by the two leads earn the film a measured consideration.