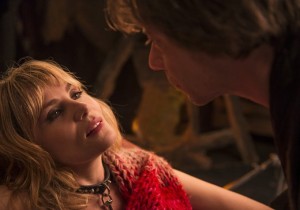 If there’s anything Roman Polanski is familiar with, it’s sex and scandal. Touches of both characterize his latest venture in a blend of starkness and subtlety that enchants. With Venus in Fur, Polanski reasserts his talent for nuance and his mastery of games of power; if the twenty-minute standing ovation he received at the Lumiere theater at Cannes is any indication, the film will shock, provoke and entertain for years to come.

Adapted from the award-winning play of the same name, Venus in Fur depicts one night in a deserted theater in France. Exhausted from a day of disappointing auditions, writer-director Thomas (Mathieu Amalric) reluctantly allows a last minute arrival (Polanski’s wife Emmanuelle Seigner) to audition. Exasperated with her flamboyance at first, he slowly finds himself charmed by her uncanny grasp of the role, embracing the play’s intricate exploration of sado-masochism in the 1800s. Before long, the two have begun to read through the entire play and reality and fiction are no longer separate. As master and servant and male and female switch roles interminably, the relationship between the players grows ever more complex and threatens to derail all decorum.

Polanski directs the film with confidence and a theatricality that is never static or trite, infusing a simple two-character narrative with such an 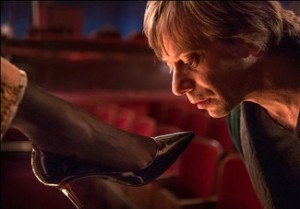 organic, gripping style that viewers can’t help but be enthralled. He has always been an expert at crafting suspense; in everything from Rosemary’s Baby to Ghost Writer, his ability to sustain tension is only (mildly) surpassed by the likes of Alfred Hitchcock. Here, Polanski utilizes this skill to shape one of the most entertaining and convoluted relationships ever to grace French contemporary cinema. The result is that the power struggle between Thomas and Vania feels as nail-biting and unpredictable as any of his former protagonists’ encounters with the supernatural.

The film’s play with self-reflexivity, power struggles, and role reversals will keep spectators guessing who is in control long after the closing credits, while the double-entendre inherent in every line of dialogue will doubtless generate equal parts confusion and laughter. Polanski’s films are typically very well written but Venus in Fur is exceptional, reasserting his talent for adapting plays to the screen. Where the limitations of the script to one setting and two characters could have easily created a predictable and stagnant style, Polanski tackles this challenge head-on, infusing his camera with liveliness and energy. There are hints of Tim Burton in the sweeping cinematography and in Alexandre Desplat’s eccentric score, but ultimately Polanski makes the film his own, building on his natural propensity to surprise and amuse, this time within a condensed, basic setting.

The cherry on top of it all is Seigner’s performance, a tour-de-force capturing the mysterious nature of femininity with precision and beauty. She effortlessly alternates between cluelessness and authority, redefining the femme fatale in a seemingly impossible (and surprisingly original) manner. Unlike the play’s usual casting of a novice actress, the focus on Vania as an older character infuses the narrative with a vulnerability and risk-taking balanced by the wisdom of an older, wiser woman grasping at her last chance at an acting career. 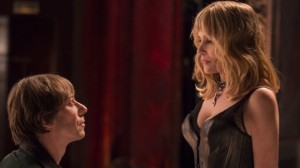 Venus in Fur secures Seigner’s reunion with Mathieu Amalric, her co-star in The Diving Bell and the Butterfly, and this time the chemistry between the two actors takes on a wild life of its own. Amalric embraces the role whole-heartedly but, like the man he plays, is no match for the explosive blond bombshell that is Seigner. His struggles with submission are riveting to watch but he seems to lack the self-assertion and confidence to assume a dominant role, making him a slightly awkward fit for a performance as a director. Even so, the sharp back-and-forth remarks exchanged between the two and their constantly rising and falling levels of power ensure that there is never a dull moment. If Vania proves hard to tame, it is equally because Thomas doesn’t try very hard to do so. The greatest merit of both performances, however, is their exposure of the performative nature of gender, and how wonderful it can be to twist, defy, and play with these predefined expectations.

Venus in Fur illustrates the simplicity and beauty of making a good film, demonstrating that with a conscientious director, potent actors, and dynamic source material, very little is left wanting. More than making up for the tepid reactions around his previous theatrical adaptation, Carnage, with Venus in Fur Polanski delivers his own delightful take on the classic battle of the sexes. As haughty as it is delicate, the film will doubtless inspire fans of the play and theatergoers overall to flock to the cinema and vice-versa. In the chaotic, uneven battleground where relationships are formed and gender roles are up for grabs, thank goodness we have Venus in Fur as one more voice of unreason.