The Cannes Film Festival simply wouldn’t be itself without a welcome dose of existentialist surrealism. Paolo Sorrentino’s follow up to This Must Be the Place delivers just that; a wild foray into aristocratic life in Rome, The Great Beauty presents a riveting portrait of grandeur and its wastefulness. 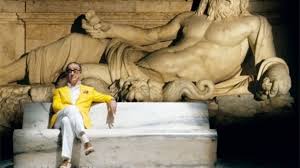 The film focuses upon Jep Gambardella (Toni Servillo), a middle-aged writer who spends his days mingling at parties and trying to find inspiration for his new book. Jep attempts to relive the passions of his youth in his meanderings through Rome, interacting with an assortment of colorful characters who seem as fixated on their own worlds as he is. Encountering everyone from elegant countesses to friendly midgets, Jep comes to realize that Rome’s glossy exterior hides a vapid core of pseudo-intellectuals clamoring for attention. Finding himself mesmerized by the city’s timeless beauty even as he comes to question the superficiality of its upper classes, Jep persists in his search for authenticity and meaning. What he discovers is that triviality runs deep, and even splendor for splendor’s sake can possess its own brand of depth.

The Great Beauty is the kind of film that surprises and enchants in equal measure. Delicate and lovely, like a colorful macaroon, the film impresses upon its viewers the utter delight of reveling in images ‘simply because’. Sorrentino is a master at capturing both the simple pleasures and the bizarre inconsistencies in life, effortlessly placing the two side by side. The joy he takes in people-watching translates beautifully onscreen; the clubbing scene in particular is a tour-de-force. Through the eyes of his non-judgmental camera, we are presented with an enviously hectic party, where twenty-something wannabe models mingle with escapees from the local old folks’ home and both groups dance to heavy electro with equal vigor. Contorted compositions and exaggerated angles amplify the clubbers’ self-indulgent drunkenness, adding a dream-like quality to a scene which otherwise seems scarily accurate. Jep watches the partygoers with a mix of elation and exhaustion, philosophizing about the nature of conga-lines and how they can represent the circularity of existence (‘it’s the train that goes nowhere…that’s why it’s the best’). This is the brilliance of Sorrentino’s film; he blends the serious with the trivial in such a subtle manner that his tone never feels patronizing or overly critical, even if it is dripping in satire. Much like Jep himself, the director seems to love the ridiculousness of lavish lifestyles even as he pokes fun at them with biting humor.

Comparisons to Fellini’s films are inevitable, particularly La Dolce Vita, and indeed Sorrentino makes ample reference to the Italian master throughout his

film. The relatively loose plot, wandering existentialist protagonist, Roman setting, and satire of high society are just a few of the elements that link the two films together. Nevertheless, The Great Beauty manages to instill its plot and characters with a slightly larger sense of cohesion and humanity; rather than encouraging the relatively distanced engagement characteristic of Fellini’s films, Sorrentino’s film draws you in completely. Building on the excess and extravagance of the parties in La Dolce Vita, The Great Beauty takes them in another direction by adding recognizable and semi-realistic touches, making the scenes more accessible.

Sorrentino sculpts Rome as the other lead protagonist in the film, perfectly complementing Toni Servillo’s calculated performance as Jep. Sevillo is poised, inquisitive, and often pensive but never conceited, making him the perfect candidate for an existentialist protagonist. As a viewer it is difficult to ascertain whether you want to comfort him and treat him as an aging grandfather or shake him out of his endless musings. His youthful, lost manner instills the character with a sense of timelessness that echoes Rome’s own perpetuity.

The city for its part is filmed lovingly, carefully, with grand sweeping shots dignified of its immense historical facades. Much like Jep himself, Rome exudes both breathtaking splendor and crumbling antiquity, shaping itself as the perfect setting for exploring transient passions. In a place where anything can happen, everything and nothing does. Touches of serendipity and surrealism are inherent in the entire film, from the Italian tour guide who speaks fluent Japanese for the hoards of tour groups, to the nine-year-old girl who conducts a kinetic art show during a party, to the cardinal lining up for the papal throne who propagates his best cooking tips to anyone who will listen. It is in these beautiful moments that life seems simultaneously full and devoid of meaning, in the best Italian tradition. 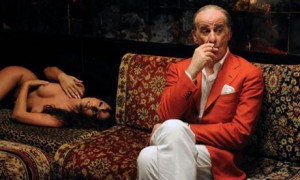 The Great Beauty is at its base a whirlwind journey through one of the world’s oldest and most picturesque cities. But look past its stunning exterior and you will find so much more than that. Contemplative, dreamlike, and bizarre, it offers no straight answers but rather breeds questions and remains a pure joy to behold for those in love with cinema.