Cannes 2013: Nothing Bad Can Happen Review 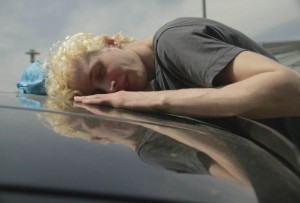 Katrin Gebbe’s breakthrough debut film Nothing Bad Can Happen was the only German film included among this year’s official selection at Cannes. Harrowing, intense, and deeply moving, the film proves difficult to watch even for those seasoned in extreme cinema. Much like the now mythical Compliance, the film bases itself upon real events, which only serve to deepen and amplify the horror experienced by audiences. Receiving walk-outs, boos, and rampant applause in equal measure, Nothing Bad Can Happen is one of those films that is sharply set on dividing opinions; indeed, based on the subject matter, it could not have happened any other way.

The film concerns itself with Tore (Julius Feldmeier), an ingenuous and clean-faced teenager who finds his calling in an underground religious society called ‘The Jesus Freaks’. More pacific than their name would imply, the group consists mainly of homeless youngsters looking for solace in Christianity. Tore believes he has witnessed a miracle when he is able to restart the broken car of a skeptical family by asking for God’s help. He befriends the family and later agrees to be taken in by them when they offer him a place to stay. Tore nurtures a growing affection for their teenage daughter, Sanny (Swantje Kohlhof), under the watchful eye of Benno (Sascha Alexander Gersak), the patriarch of the family. Even as the youths explore their nascent feelings, Tore begins to realize that he has been drawn into a twisted and perverse world, as Benno and his wife begin to use him in ever more disturbing ways. Caught between the need to protect Sanny and his desperate instinct to escape, Tore tries to find meaning in the growing atrocities he is subjected to by calling upon his beliefs. A true spiritual battle ensues, worthy of any number of disturbing chapters culled from the Bible.

Nothing Bad Can Happen embraces its ironic title with gusto. As the horrors shown onscreen intensify, witnessing the events becomes ever more difficult. 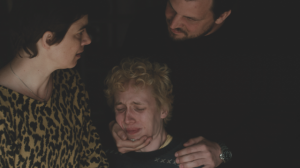 Still, it is unjust to accuse Gebbe of employing these incidents for mindless shock value; rather than sensationalizing them, she frames the episodes as triggers for a moving examination of religion, strength, and the resilience of the human spirit. For Tore, nothing truly awful can touch him, simply because he is under the protection of a God he believes in with all his heart. While many may scoff at this perceived naïveté, in his haunting performance Julius Feldmeier conveys a pure sense of peace tempered with inevitable fear and despair. It is perhaps for this reason that the film is made all the more potent; even as Tore struggles to cope with the pain inflicted upon him, his beliefs provide him with the last necessary drops of perseverance in order to safeguard Sanny. While such religious sentiments are far from novel in the cinema, here they have found a fresh voice. Gebbe ensures that the exploration of spirituality’s power is always balanced with an unflinching look at the harsh realities of human nature. Thus, she complicates any straightforward reading of the film as condoning or condemning religion; instead, following the best in the tradition of independent cinema, the viewer is encouraged to question its value and wonder about the limits of willpower. In an increasingly fragile and atrocious world, religion seems simultaneously all the more futile and yet increasingly necessary.

In a similar manner, the complex relationships between the family members ensures that the roles of victims and perpetrators are not as unproblematically delegated as might be assumed. Gebbe manages to explore the collection of egos, desires, and forbidden thoughts that trouble even the most functional of families, revealing an undergrowth of secrets. She directs the entire cast magnificently, though Feldmeier and Gersak stand head and shoulders above the rest as Tore and Benno respectively. Their warped pretend father-son relationship fosters a mutual sense of admiration and apprehension, their subtle power exchanges belying the relatively little experience either actor has previously had onscreen. The gradual worsening of their ties has been crafted so delicately, that the scale of the events shown seems to almost take the audience by surprise once things begin to spin out of control. Gebbe plays with the notion of glorifying her protagonist but never fully indulges in it, allowing the narrative to mold him as equally heroic and foolish. It is her welcome grasp of these subtleties that elevates the film to a higher level – one worthy of praise and appreciation as much as disbelief.

The stunning cinematography alternates between a sense of severe claustrophobia in the family’s repressive home and the expansiveness of the picturesque surrounding areas – almost as if they were there to tease Tore as reminders of his impossible freedom and the beauty God is capable of creating. The film maintains an intimate, acute framing on the atrocities at hand, aided by the carefully edited voice-over segments that feature Tore’s musings. Gebbe is painstaking in her set-up, carefully drawing the audience down a path from which there will be no easy re-emergence.

Though many may accuse Nothing Bad Can Happen of gratuitous brutality and dismiss it as another well-worn tale of the corruption of innocents, the film rises beyond both. Far from simply reproducing the horrific true story upon which it is based, the film weaves a web of inquiry around the pillars of faith and humanity. Gebbe is not interested in a lack of appeasement for it’s own sake, but rather seeks to probe into what drives people to commit sins and conform to religions. There are no easy answers, but the bravest of spectators will be rewarded with the opportunity to face those indispensable questions.