Harry Potter conjures up a storm at the box office. 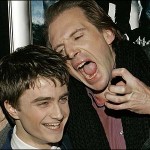 It was common knowledge that Harry Potter’s penultimate instalment on the big screen was going to perform well, but the first instalment of The Deathly Hallows has gone above and beyond what any other Potter film has managed to achieve. In its opening weekend the film made £18.3m between Friday and Sunday, taking in a huge $125m in the US, with a total global taking of $330m. This sterling performance at the box office is testament to the wide demographic of fans that have stayed loyal to the film adaptions of their favourite books. Deathly Hallows had the best ever weekend box office performance in the UK, over taking Bond film Quantum of Solace which took the title in 2008. Although the films performance isn’t a big surprise, it puts Part 2 under a lot of pressure, as I’m sure all Potter maniacs will have great expectations for Harry’s final bow.