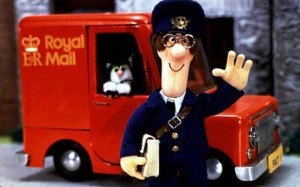 Hollywood Reporter have announced that Ron Weasley of the Harry Potter series AKA Rupert Grint is to lend his voice in an all star cast version of the British children’s television show, Postman Pat, which originally ran between 1981 and 1997 on BBC and revived in 2004.

Other stars of Postman Pat: The Movie — You Know You’re the One, which is due to be directed by Mike Disa (storyboard artist for 2011’s Hoodwinked Too! Hood vs. Evil include British stars, Jim Broadbent, David Tennant and Stephen Mangan in the collaboration between Classic Media and Rubicon Group Holding. The film is being made as part of the show’s 30th birthday celebrations.

Star of the recent Showtime and BBC comedy, Episodes, Mangan will be lending his voice to Pat in a script that has been penned by Kim Full and Annika Bluhm, longtime producer of the Postman Pat TV series.

It details the story of Postman Pat coming face-to-face with the temptations of money, status and a shiny new suit when he enters a national TV talent show competition that threatens to tear him away from his hometown of Greendale and the friends he loves.

Grint said he used to watch Postman Pat when he was a small boy:

“Postman Pat is one of those British symbols, I suppose — you are totally familiar with him and his cat, Jess even if you have never watched the series.  How exciting to be part of the Postman Pat heritage.”

The picture is set for production this month with a planned 3D cinematic release for spring 2013.