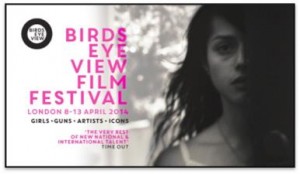 Monday 10 March 2014: The Birds Eye View Film Festival (8-13 April) is delighted to reveal details of their 2014 programme which promises to be a packed six day celebration of endlessly inspiring women from across the globe. Boasting numerous premieres, special presentations and events, this year’s Festival showcases some of the most exciting new filmmaking talent including works by British director Destiny Ekaragha and Laura Checkoway to films by Lena Dunham and Kelly Reichardt. The Festival will also celebrate some of the most inspiring female filmmakers and actors of recent times including the late pioneering animator Joy Batchelor; Broadway legend Elaine Stritch and award-winning British filmmaker Gurinder Chadha.

Birds Eye View Film Festival Artistic Director, Kate Gerova said: ‘Our 2014 programme is a real statement of intent from a new global generation of female filmmakers aiming to inspire audiences with new stories and perspectives. We believe audiences are eager for different, edgy and exciting cinema – and these filmmakers offer that in spades.’

Cutting-edge documentaries feature heavily in this year’s programme, showcasing some of the most interesting filmmakers today whose bold new approaches push the boundaries of the documentary form. From Anna Eborn’s brutally beautiful account of a marginalized Native American community in PINE RIDGE (UK Premiere) to Narimane Mari’s striking, prize-winning trance-film BLOODY BEANS which follows a group of children during Algeria’s War of Independence. Also featured is Mia Engberg’s intricately edited and evocatively scored BELVILLE BABY, a playfully original look at love, time and things that get lost along the way, shot on everything from real-life cellphone video to super-16 footage.

Special screenings include Gurinder Chadha’s BHAJI ON THE BEACH, as previously announced, to celebrate its 20th anniversary which includes a Q&A with Gurinder and Special Guests, plus Claudia Weill’s iconic film GIRLFRIENDS, recently ‘re-discovered’ by Lena Dunham.

The glamorous Festival favourite Fashion Loves Film returns to look at how images of fashion reflect culture, heritage and identity for female filmmakers across the world. From the experimental to the luxurious, highlights include Lena Dunham’s brilliantly quirky BEST FRIENDS for the Rachel Antonoff Fall line 2013; SHOWstudio Head of Fashion Film Marie Schuller’s exploration of Asian Couture; Kathryn Ferguson’s Irish fantasiaMATHAIR; and MIU MIU’S WOMEN’S TALES by directors including So Yong Kim, Ana Duvernay and Zoe Cassavetes. A panel discussion at the ICA follows.

Bursting with the country’s most exciting new talent, Bright & British sees a day of celebration and anticipation for what’s to come in British cinema. Saturday 12April offers a packed day of screenings and industry events including ‘Welcome to the Audience’ which sees three British filmmakers discuss the different stages of their journey; ‘Small Talk’ in which producer-director Amy Hardie  and Melissa Silverstein author of renowned IndieWire blog ‘Women & Hollywood’ delve deep into the modern film mind. A number of short films will also screen including Georgina Oakley’s FRAYED andTamara Drewe writer Moira Buffini’s FATHER. Audiences will be able to buy a BFI day pass to all of this and more which culminates in the Special Screening of BHAJI ON THE BEACH.

From international award-winners to undiscovered gems, a host of international shorts will screen at the Festival on Sunday 13th April including Sundance Award-winner THE CUT from director Genevieve Dulude-Decelles to Anahita Ghazvinizadeh’s Cannes award-winning film NEEDLE.

The ever popular Sounds & Silents strand returns this year with a celebration of ‘Women in Jazz’ which sees cutting-edge live music scores to silent films by incredible new female artists.  A live score by Niki King, one of the UK’s leading singer-composers and winner of the prestigious Perrier Jazz Vocalist of the Year Award, to classic comedy starring the radiant Gloria Swanson WHY CHANGE YOUR WIFE? at BFI Southbank. This year also sees the return of the hugely talented and award-winning singer, musician and songwriter Amira Kheir whose live score to SUMURUN (ONE ARABIAN NIGHT) will take place at the Barbican.

For younger audiences, Children’s Cinema Club: Famous Fred and animated shorts, workshop & Q&A promises an afternoon packed full of animated fun which includes a screening of BAFTA winning animation FAMOUS FRED, starring Lenny Henry as a cat who secretly moonlights as a feline singing sensation. Children will also have the opportunity to participate in a ‘make-your-own animation’ workshop where they can bring their very own animations to life, plus they will have the chance to speak directly to some of the filmmakers.

In addition to screenings and filmmaker Q&A’s, this year’s Festival is pleased to announce a Training & Craft programme which offers practical skills, invaluable insights and a bucketful of inspiration for the aspiring filmmaker and the fascinated fan. Filmonomics presents a number of events including ‘The Black Art of Being Confident’led by independent creative producer Mia Bays (Shifty, Ill Manors, Lilting) There will also be a special event and panel Q&A: Joy Batchelor – A Life in Animation to celebrate the centenary of the British pioneer animator whose credits include BAFTA nominated feature animation Animal Farm.  The event, curated by Batchelor’s daughter Vivien Halas, includes rarely-seen clips alongside an in-depth overview of her career followed by a panel discussion with animation programmer and author Clare Kitson, BFI Curator Jez Stewart and Vivien Halas. Additional events also include An Afternoon Tea with Critics, Actors & Directors in partnership with M.A.C. Cosmetics at Kettner’s Champagne Bar in Soho, tickets for which are free and will run throughout the Festival.