We Are The Best! Review | London Film Festival 2013

Lukas Moodysson won deserved plaudits for his first two features Fucking Åmål (aka Show Me Love) and Together. Since then he has explored darker stories and anyone who saw Container (screened at LFF in 2006) witnessed the implosion of one of Europe’s best directors. Thankfully We Are The Best! is a fresh blast of youthful fun. 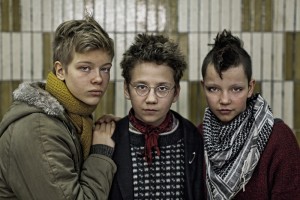 his is early 1980s Stockholm and 13-year-old Bobo isn’t happy. Her mum’s having a house party but Bobo just wants to hide in her room and listen to punk rock.
At school Bobo gets flak from the boys because of her cropped hair but at least her mohawked friend Klara will back her up. They present a united front against the uber-80s girls (all blonde hair make-up and spandex) who say punk is dead.

While at the community centre Bobo and Klara get frustrated at the noise coming from the rehearsal room. But Klara spots a loophole – the band haven’t put themselves down on the rota, so she signs in – if someone’s gonna make a noise it might as well be them. The weak-willed manager has no choice. So Klara and Bobo have the space and the equipment now they just need the music. Driven by school frustrations they pen their first punk song and recruit the quiet but talented Hedvig to complete their three-piece.

Based on Coco Moodysson’s comic, We Are The Best! has a natural spirit and perfectly captures the childhood need to stamp your personality on the world. Punk music provides a chance for these three to rail against the status quo (and Status Quo) to create something that is really theirs. The performances never hit a false note with a truth and emotional honesty that sucks you in. So while these girls are finding their feet you can’t help but get wrapped up in their world.
This is real childhood and like Klara’s bass guitar it resonates: The intense focus on music and magazines, the grand plans, the friendships, the utter bafflement at your parents behaviour. As with the kids these parents are real characters: fallible, silly, unpredictable, but loving.

As these girls go through squabbles, mixed allegiances, and the spectre of boys so their musical chops develop and they become a proper punk band with a suitably fuck-off attitude to their audience.
Growing up is hard to do but with We Are The Best! Moodysson has rediscovered his light side and created a story of adolescent outsiders full of vitality and heart.