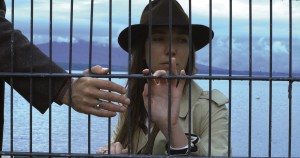 “In Russian, Kamera means prison”, says one of the protagonists in Jean-Luc Godard’s new 3D feature (yes, you read that correctly. This is the French veteran’s first foray into the world of three dimensional presentation). The statement, arriving at about the mid-point, could be a telling autobiographical remark. Does Godard view his own life behind the camera as a prison?

If so, he spends the 70 minute duration of Goodbye to Language disseminating accepted form and structure, stretching out the boundaries and weaving a loose rumination on existence. Stylistically, images and sounds emerge, dissolve and erupt much like our own sensory faculties in everyday life. This is a cinematic extrapolation of the empiricism of our day-to-day existence. Godard, with trademark visual flair, imaginatively evokes the fluid relationship that exists between multiple strands of consciousness.

There is no clear linear narrative to follow. A single man and a married woman are involved. There is a dog. Godard appears to be quite the animal lover. Perhaps frustrated with humanity, the sole truth that emerges is that his views echo those of Darwin, whom he quotes, “Darwin insisted, citing Buffon, that the dog is the one living creature that loves you more than it loves itself’’. We return to the dog many times. 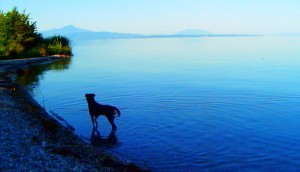 Godard ensures that the absurd nestles next to the profound. This is a kaleidoscopic picture that embraces every shade of existence (except, maybe, the notion of loss). There is a recurring joke that elicits mild mirth. Gedeon (Kamel Abdeli) sits on the toilet with uncensored bowel noises emanating freely in front of his naked partner. All the while he waxes lyrical about life and how we are all the same in ‘poop’. He acts like a crude, cut-price Plato perched on a ceramic throne.

Above all though, Goodbye To Language aims for the realm of Meta cinema. In doing so, it is wrapped up with the sort of levels of pretentiousness that one might expect. And yet, this does not negate the plentiful piercing moments of potent clarity that emerge through the deliberate, hazy fog. Frequently frustrating, but also dazzling – in almost equal measure – it is a timely testimony to the irrepressible enfant terrible that lurks within this ageing maestro.

It is certainly a short, taut piece of work that will require a few visits to digest. It is teeming with so many ideas. For this writer, never the most ardent of Godard appreciators, this was a welcome reminder as to his acumen with the medium of cinema. Goodbye to Language perhaps, but hello to a new twist on cinema. A visual delight that tickles the neurons too.