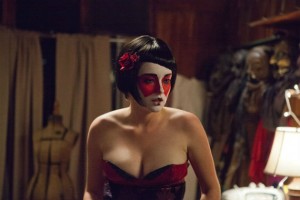 Jerome Sable’s Stage Fright is as if Scream and Glee had a baby, which then took steroids and starting singing to itself “I’ll Do Anything For Love (But I Won’t Do That)”. It’s a crazy mishmash with fun and fabulous singing, something dangerously camp and tense all at the same time. Stage Fright takes places largely during a summer camp where children from all around come together to do musical theatre, but of course these kids aren’t with the in crowds at home; they are the geeks, the gays, the general outsiders but here they rule and suddenly becomes the cool ones, which sometimes can become quite a heavy burden to bear as these kids will realise.

Rewind ten years previously and Minnie Driver plays the seductive Kylie Swanson, an actress with an incredible voice, wonderful stage presence and a great set of legs. She has just performed opening night of The Haunting of the Opera (a thinly veiled homage to The Phantom of the Opera down to the mask and all) and the audience loved her, even her manager, Roger McCall (Meatloaf!) is pleased. Her two kids appear, a boy and a girl, who seem completely besotted by the entire evening – her daughter has already caught the stage bug so when their mother is brutally murdered by a masked man, their lives completely fall apart. Fast forward to the present and guess what… Kylie’s kids, Camilla (Allie MacDonald) and Buddy (Douglas Smith) are working at the camp as kitchen staff after they were taken in by the owner of the camp, none other than Roger.

Unknown to the kids who come year after year, the camp is set to fail and close so with no money left and no where to turn so Roger needs this to be the year that he finds a star – so he decides to do a revival of The Haunting of the Opera, for the first time since Kylie’s tragic death. Here starts a story filled with twists and turns, drama and romance and best of all – music! Camilla desires nothing more than to be part of this production, so she sneaks into the auditions and persuades Roger to let her be part of the production after she is picked to play the role that her mother had played all those years previously. Of course with teenagers things aren’t so simple and director, Artie Getz (Brandon Uranowitz) has picked both Camilla and Liz Silver (Melanie Leishman) to play the role – but all that really matters is who is going to play her on opening night when all the big producers that Roger has promised will be coming. Artie makes it very clear, in return for sexual favours each of the girls will get more rehearsal time and whoever ends up having sex with him will ultimately become the girl on the night.

So on one hand you have this Glee like storyline with teenagers hormones running a riot, lots of bitching and general scheming who are all singing pop songs and upbeat melodies to one another

whilst on the other hand, in an unknown location a masked madman (with the same face as the original killer) is singing heavy metal, swearing and throwing knives at a wall of pictures of the kids at the camp. Of course, if Sable’s tale has taught us anything, it is that evil people listen to heavy metal and nothing else. The closer to the production they get, the tenser it all becomes. Whilst the audience are aware that something is certainly going to happen, it does take a while before the first actual murder at the camp appears and thankfully it was the awful Artie. From here on out, the kids at the camp become worried and scared but Roger sings that the show must go on (especially as he has finally procured a producer to come and see the show). Final twists and turns, big showdown, all revealed and the end.

What one has to remember is that all the while that Stage Fright is playing, they are singing – you must never forget this is a musical and a clever one at that. The lyrics, ‘I’m gay, I’m gay but not in that way,’ sticks in the head as a joke about being a fan of musical theatre and whilst you may be slightly offended with the whole thing, if you can laugh at yourself and learn to not really give a damn, then something quite fun and charming comes across with Stage Fright. It is not really going to do anything huge to the genre, but does pick up where films like Repo left off and let’s be honest, they so rarely happen, we should enjoy them whilst they are here. The stand out performance really is from lead, Allie MacDonald who plays Camilla so believably that you really are gripped watching her journey to try and understand what happened to her mother.

A huge vat of fun that even the grumpiest in the audience would probably smile, Stage Fright is one musical worth tapping your feet to.