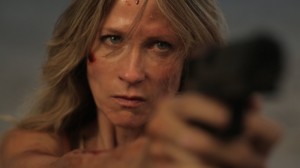 Never Let Go is one of those films that you just don’t expect; part thriller, part action and totally horror (if you really consider the subject matter), it sort of just starts and before you know it, it has crawled under you skin and gripped tight. The latest film by Howard J. Ford (best known for The Dead, The Dead 2: India and FrightFest favourite), Never Let Go features one of the best female action roles of the year with Angela Dixon in the central role as Lisa, a woman who has to go through the biggest nightmare that a parent could ever suffer; the abduction of her baby.

As the film starts, the audience are forced directly into the action as a baby from another couple is stolen whilst they are in the next room. We know nothing about them or even if we are going to see them again, but the stage has been set. Soon after, the audience meet Lisa is at home; a women clearly broken up by circumstances from her past but nothing is quite clear enough. Has she been wronged some how? She is recommended to have a break – get away with her baby and have some time to bond with her new child. She ends up in a beautiful and unknown part of the world where people take over the streets, the sun beats down strong and the beaches run for miles. There is something mysterious about Lisa; she phones a man in the US, a politician or other whom she seems to have a secret with and she seems constantly paranoid that something is going to happen to her or her baby. But soon she calms and one day, whilst on the beach, the worst occurs and when her back is turned, her baby is stolen and this begins a chain of events that are likely to change her life forever.

What is simply incredible about Never Let Go is the action sequences; as soon as Lisa realises that her baby has gone, she jumps into survival mode and not just like a mother scared but a trained killer in pursuit. She storms the streets; pacing through its narrow runways, literally flying through the city to catch the men that have done this to her. She catches up with one of the guys, a decoy and becomes implicated in his murder. Are the police involved in this as well? She carries on with her search, not letting the team of officers chasing her slow her down. She phones the politician again and then a connection at some intelligence agency – this is a woman in the know. But she has secrets about the baby and who the father is. She is on medication to help her deal with anxiety and to top it off, the flight manifesto says that she was never travelling with a baby in the first place. Is all this drama going on inside Lisa’s head or is her baby shoved into a bag and flying down the highway in the back of a van? 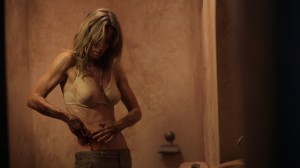 close to losing everything. Together they make the film one of the most exciting adventure films of the year and it is so powerful to see a woman, and a kick ass one at that, in the centre of it. Ford follows Lisa through the city, never slowing down and never getting bored. He clearly loves his surroundings and wants to show them off to the audience. He wants to bring the audience into the story, make them part of it and become invested in finding the baby as well. Or at least figuring out what has happened. Dixon is electrifying on screen – she makes sure that her character matters. But she also holds all the keys to the story; whether its her mysteriousness or the thrilling action heroine, she carefully balances a line between Jason Bourne, Lara Croft and Carrie Mathison.

Never Let Go is an action packed ride of thrills that buries down deep and whilst it may not change the face of cinema, sometimes the point in watching films is to have a lot of fun.