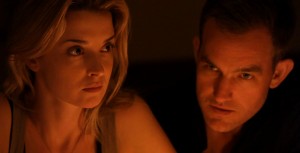 Coherence is a no-budget sci-fi drama about a group of Californian suburbanites experiencing a very strange night in their lives. A comet passing Earth, visible in the night sky, sets off a remarkable chain of events. To say anything further about the plot would be mean to those reading without having sat and watched the film beforehand. Needless to say, what infolds will wreck your head. Really, it demands repeat viewing and a good amount of brain exercise to link together the dynamics of what occurred and why. Good luck with that!

One thing is crystal clear: Coherence demonstrates, with aplomb, that budget limitations can go to hell if the premise of your movie is an absolute cracker. Directed by James Ward Byrkit, best known, if that’s the right word, for his association as a conceptual artist on Gore Verbinski’s Pirates of the Caribbean trilogy, as well as penning the story for Rango, his debut feature will be heralded as an instant cult classic.

Buffy The Vampire Slayer alumni, Nicholas Brendon, leads the cast and eagle-eyed Whedonites will also note that co-star, Maury Sterling, appeared in an episode of ace Buffy spin-off, Angel, as fiendish empath demon, Barney. The rest of the cast is made up of television actors and screenwriter-director, Lorene Scafaria (Seeking a Friend for the End of the World).

Coherence’s very limited budget is evident in the shooting locations (mostly unfolding in a dining room with occasional street scenes), conventional interior lighting and no frills camerawork. Comparisons will no doubt be made to Shane Carruths celebrated debut, Primer. Both deal with similar themes (sort of), but as others have pointed out, Coherence is a warmer experience and a world away from Carruths’ aloof and intellectual style. One thing is for sure, Primer and Coherence will make future film lists titled ‘Films That Caused Your Brain to Melt’.

If you’re into it, Byrkit’s film will haunt you for days. The ending, especially. One note of guidance: The dinner party scene is vital to the rest of the picture and isn’t a bunch of mumblecore chatter to kill time before things gets all crazy-bizarro. Listen very carefully to what each character is saying.