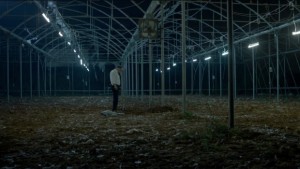 From Aharon Keshales and Navot Papushado, the directors that brought us Rabies return with one of 2013’s best films, Big Bad Wolves.

Big Bad Wolves doesn’t fully reveal the power of its own capacity until about half an hour in, but that isn’t to say that the first part isn’t as interesting as the rest. After a series of brutal murders of young girls that have taken place, the police force are hot on the heels of someone they have been following for a while and are waiting to convict as a murderous paedophile, a quiet, lonely, school teacher, Dror (Rotem Keinan). But as it turns out the father of the latest victim, Gidi (Tzahi Grad) has decided to take the law into his own hands and captures Dror, torturing him until he gives up the whereabouts of the head of Gidi’s daughter. What Gidi doesn’t count on is that a police officer, Miki (Lior Ashkenazi) who is working on the case would turn up at his door and join him in this vigilante justice.

What Big Bad Wolves does is subvert all audience expectations; alienating them further as the film goes on. As citizens we are taught to obey and believe in our police forces, so if they believe someone to be a criminal, they probably have reasons behind that but Big Bad Wolves cleverly turns the criminal into the victim as Dror is tortured and humiliated in a hidden basement; having his fingers broken and toenails ripped off. Very quickly, the audience are forced to decide whether they agree with this treatment or whether they should believe Dror, who has been protesting his innocence the entire time. There is a dark feeling throughout the film that Dror could infact be guilty, but cleverly the audience become complicit in his possible crimes. The directors handle this point brilliantly and keep the audience wondering throughout the whole film, only commenting briefly upon the answer in the end but leaving it quite up in the air.

It is in fact, the three central performances that are the highlight of the film; the scenes between Miki, Dror and Gidi are at once haunting, 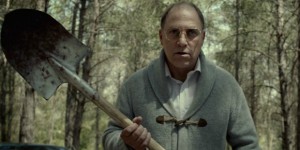 hilarious and expertly performed. There is a balance between the manic Gidi with the coolness of Dror, who is somewhat reminiscent of Hannibal Lector (think The Silence of the Lambs), always knowing more than he is letting on but never fully giving the game away. As well as this, Keshales and Papushado have captured some moments, which are simply hilarious whether it is the mobile ringtone of both Gidi and his father or the telephone conversation with Gidi’s mother, which for every Jew in the crowd was probably the highlight of the film.

Big Bad Wolves was made in the light of fairy tales that parents tell their children, where the wolf captures the child and takes them away. But in fact, despite it initially being pretty clear who the wolf is meant to be in this tale, it quickly changes and all three of the main men become wolves in their own right. They each have something to prove and yet they cannot do so without being in tandem with the other two. The film is careful to never judge one of them more than the other two and is also very aware of itself in the light of jokes around Israeli’s; be it their attitude to torture, mothers or even Arabs. This unfortunately may not translate all that well across the world, where the film makes these points lightheartedly, an outside audience may confuse this for heavy handed jokes that may simply be in bad taste. 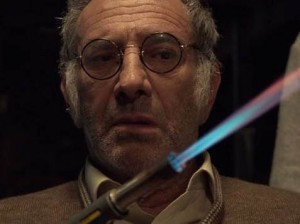 It is also interesting to look at the use of torture and gore in Big Bad Wolves, rather than make it sensational and shocking as the audience is used to from films like Saw and Hostel, the torture here feels much more personal. The camera doesn’t disguise what is going on, on screen and instead shows the brutality of the violence to the audience. When his fingers break, the audience feel it, when his nails are ripped from him, the audience feel it and once more they are made to level with Dror, making him complicit in his pain and possibly also his torture.

In the new wave of Israeli horror cinema, Keshales and Papushado are at the top of their game; they have created in Big Bad Wolves a thrilling story about consequences and conscience. They make the audience question all the way through until the gripping final moments and raise some hugely interesting questions about responsibility as well as the victim/offender dichotomy.