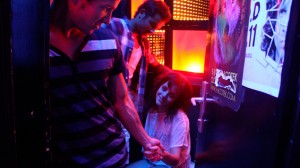 Johnathan Gurfinkel’s Six Acts is a compelling piece of filmmaking and an interesting example of the type of cinema that is now coming from Israel. Part coming of age drama and part discussion around economic pressures, Six Acts tells the story of Gill (the brilliant Sivan Levy), a teenage girl who has just moved into a school in a wealthy part of Herzliya. To fit in with the rest of the crowd, she thinks that if she gets with the most popular boy in school then she will be accepted except she doesn’t realise that instead, in this world, being easy is another reason for ridicule. Over the course of a few weeks, each of the boys talks to their friends about the girl who will just about to do anything and they each take a turn in abusing and embarrassing the girl, who thinks this is her key to popularity.

Whilst at first, Six Acts teases the audience by appearing as a straight forward teen drama, the film quickly turns into something much larger and quickly cements itself as one of the most important pieces of Israeli filmmaking in years. When Gill tires to get close to Tomer (Roy Nik) at the start of the film, he seems interested but soon starts to lose interest and the more Gill tries to act the part, the less forthcoming Tomer becomes. His best friend, Omri (Eviatar Mor) decides that he will ‘take over’ and decides to take advantage of Gill in ways that she could never have imagined. They come together at the pool, in his house, at parties and sometimes he seems like the invested boyfriend and at other times, he invites his friends to watch and to take part in exploiting this confused young girl. There are two scenes in particular, which are hard to forget; when Omri invites Gill over to his house, they decide to make out in his room but Omri’s friend is watching them. As the couple get more heated and Omri suggests having sex, the friend start to touch himself and even touch Gill, which at first she fights but is quickly soothed by Omri as he explains this is ‘cool’ and what he wants. A second sequence is when they go to a party and Omri persuades Gill to go and buy beers, even though they are all underage. She flirts with the shop assistant and uses her money to buy the beers before returning to the party to see that Omri and his friends had left.

As the story goes on and attitude towards Gill becomes more ambivalent and dangerous from those around her, Gurfinkel’s film tries to explore 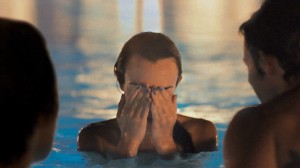 what happens when no one questions what is wrong and when the adults close their eyes to something that is sitting right in front of them. It also delves into the psyche of the abused, something which is rarely explored in such depth for worry for being offensive. Levy plays Gill with a fire, which really does set the screen alight but also manages to balance her deep emotional outbursts with her own thinking that this is what she should do to become recognised.

Six Acts is a film that will stay with you long after you have watched it for many reasons. It’s a haunting sort of filmmaking that comes along too rarely and says something so important for the youth audience, shining a light on the undergrowth of youth culture as well as their vital misunderstandings about sex and destructive power of it.