Seret 2015 | Next To Her Review
Home
Reviews 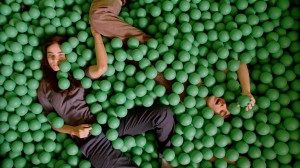 Few people will know Asaf Korman’s (who previously edited horror comedy Big Bad Wolves) Next To Her and even fewer will be aware that the best female performance of the year is one of Korman’s lead actresses, Dana Ivgy. That’s right, hands down, Ivgy (daughter of Moshe Ivgy) gives the most powerful, unsettling and evocative performance of the year (leaving other actresses in the dust for sure). Next To Her, which is scribed by Korman’s wife and other lead actress, Liron Ben-Shlush, follows the story of two sisters, Rachel (Ben-Shlush) and Gabby (Ivgy).

Gabby is severely mentally challenged and her older sister is her full time carer, as well as holding down a job herself to keep the pair afloat in their small apartment. One day when Rachel leaves for work, social services find out that Gabby is often left alone at home because there is no one else to look after her – so Rachel is forced to seek out daycare for her sister. The audience are led to understand that this is the first time ever that someone other than Rachel is looking after Gabby and this disrupts both the girls lives in ways they could have never imagined. Next To Her is an incredibly compelling and evocative tale of co-dependence and of familial love. As Gabby settles into her daycare group, Rachel finds herself growing more tense and distant as the void that is left from looking after her sister seems threatening enough to engulf her entire existence. When Rachel collects Gabby from the daycare, she often finds herself being rude or uninterested in the people that work there because she is jealous that they get to spend time with her sister She quickly and uncomfortably finds a man to spend time with, Zohar (Yaakov Zada Daniel), as she expects that she can easily box up her emotions and need to look after someone and place them on someone else. Alas she doesn’t find this easy whatsoever and instead Gabby becomes entwined in a destructive threesome with Zohar and Rachel.

Next To Her is about small moments, slights of hand that move the narrative on and force the characters to make one decision or another. Often Rachel doesn’t understand what is good for her and will do anything to jeopardise any sense of ‘normality’ that comes her way. The first time she goes out with Zohar, who she meets at work, they go back to his place (he lives at home) and they have one of the most awkward and sad sexual encounters ever caught on film. From the very start of their relationship, it is all about Rachel guessing what she thinks Zohar wants because she doesn’t understand or try and learn how to deal with relationships other than caring for her sister. The pair move slowly but never together, they are never in tandem and this foreshadows the tension of their bond throughout the film. When Zohar moves in with the sisters, Rachel cannot bear to leave Gabby out on the camp bed in their living room and moves her onto the floor of the couples bedroom, much to Zohar’s disappointment. Even at the point that Gabby is fine alone outside, Rachel believes she knows better and forces her sister into a much worse silent solitude than she already lives.

Korman is an extraordinary filmmaker, who truly understands how to capture both physical and mental emotion on screen. He appreciates and takes

the time to allow his camera to glide across, taking in every lick of feeling from the characters. The film is littered with close ups, making the audience both complicit, intimate and integral with the storytelling. He brings us close to the faces of the central three characters, so much that we are forced to know them both what they are and for what they want the world to think they are (which are often two different things). Of course though, a lot of the success of Next To Her is the incredible performances from the central two female’s who have taken on these difficult but important roles.

Ben-Shlush as Rachel is a silent fighter; the final and terrifying sequences will ultimately reveal the lengths that she would go, to have her sister in her life. But she is also a broken and sad woman who has grown in such a way that making another connection with someone other than her sister is near enough impossible. She doesn’t do anything out of malice or to hurt but because she doesn’t understand any other way. Ben-Shlush’s performance is stunning – she is beautiful and shines brightly on screen. She plays delicately and succinctly, and her best moments are against Ivgy as Gabby. Ivgy reaches heights that most actresses fight to achieve their entire careers; as Gabby she contorts herself in ways that literally and metaphorically show her bend and break. She throws herself into the role and does justice to it by representing a group of people rarely given a chance to have their story told on screen. The performance is well thought through and doesn’t sensationalise the fact that a disabled character is being played by someone without a disability.

Next To Her is something special and highlights the incredible female talent coming from Israel at the moment; both on screen and in Ben-Shlush’s role as script writer. It’s a story anyone who has cared about someone can relate to and its an incredible journey that the audience would have taken by the end.