Seret 2015 | Self Made Review
Home
Reviews 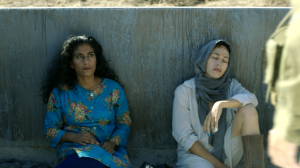 Powerful, provocative and darkly funny, Shira Geffen’s Self Made is another in a line of incredible female led Israeli films from the past year. Telling the story of two women; one Israeli artist and one Palestinian who potentially could become a suicide bomber, Self Made not only subverts every expectation of the audience but keeps the audience on the edge of their seat until the closing credits.

Led by Sarah Adler as Michal, an extreme artist with strong political and socio-economic views who starts the film by falling onto the floor from her broken bed, which almost throws her down. She bumps her head and before long, the audience realises that she is suffering from some form of amnesia where she can’t remember who she is and what she is meant to be doing. This is a great tactic, which works to wonderful effect as the audience have to learn about Michal at the same time as she does. But despite her unknowingness, there is an uneasy foreboding and an element of claustrophobia is strong. Her husband has gone on a business trip and leaves without giving her a kiss, she answers her door and finds a photographer and a TV crew that have appointments with her but she remembers nothing. She finds out (through the questions she is being asked) that she strongly apposes the road blocks that are in place and that she is against having children (if she were to adopt, she says, she would only have a Palestinian child). She is so against having children, that her next piece of art is an installation; it’s her womb, which she has removed and had made into a purse (“because women like purses.”). It’s quite chilling but at the same, deathly satirical.

The other lead, Nadine (played by the beautiful Samira Saraya) is a Palestinian worker with no sense of direction and no voice to call her own. She lives 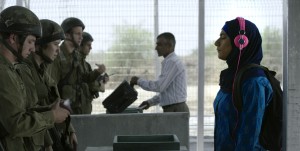 with family, who threaten to send her off to live with an aunt in Kuwait and is locked within the desolate wasteland of her refugee camp. Listening to Arabic hip-hop music, being detained at the road blocks by Israeli soldiers and sleeping with her hapless neighbour, Nadine wants to get pregnant. If she is going to strap a bomb vest to herself, and make herself look pregnant then she wants to be pregnant. But more than anything, the film suggests that she really wants to be a mother but doesn’t have the strength or courage to fight those around her. She is a victim of her own sad circumstances.

What connects these two women is an Ikea sort of company based in Jerusalem (who have outrageously brilliant vans!); Michal buys a bed from them and then complains to the management that a screw is missing from the pack. Nadine works for the company and is swiftly fired as she is in charge of ensuring the correct number of screws are placed in each order. But what brings these women together, if only for a few moments, is when both are detained at a road block and Nadine is mistaken for the famous artist and driven home by a soldier. This leaves Michal, who is growing more and more distant as the film goes on, to go back to the refugee camp. Neither women are discovered to be living the others life and people around them simply assume they are one another (despite the fact that they couldn’t look anymore different from each other – the audience is asked to suspend it’s disbelief). Simply put, these are both women who are locked into their own worlds, no one really knows who they are but find themselves more free and able to fully realise their own potential as well as discovering their own hidden desires in the others world. 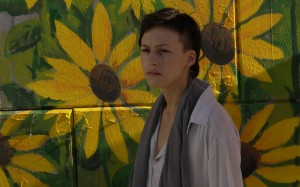 The films original title, Boreg, which means “screw” is a beautiful nod to the screws of the film; the ones that Michal is missing, the ones that Nadine uses to denote her path back home from work but also the ones that are metaphorically loose in both their heads. What Geffen masterfully does with Self Made is create a world so like our own and yet it feels so distanced at the same time. She merges and manipulates a number of genres together from drama (Michal’s husband is saddened to learn he won’t become a father) to comedy (a young boy wants to know whether to learn for a maths quiz, or will he have blown himself up beforehand, meaning he wouldn’t need to study) and whilst bringing out the sincere and beautiful humanism of the characters, she throws them into a surreal and challenging world. Whilst so many audiences are accustomed to the sandy colours of Middle Eastern cinema, Self Made thrives on it’s blues and greys, which really illustrate the two worlds of the women and when they crash together, it’s so very beautiful.

Geffen’s filmmaking is a revelation of Israeli cinema, it provokes and entertains wildly at the same time. The performances from both Adler and Saraya are so layered and full; both are so watchable on screen. Self Made is a demanding piece of work, it demands to be watched and deserves it so.