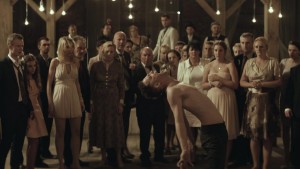 Marcin Wrona’s Demon is a fantastically tense Polish/Israeli co-production for those horror fans out there. Demon is a unique and contemporary take on the dybbuk, which in Jewish methodology is a spirit, believed to be a dislocated soul of a dead person that clings onto someone living.

In Wrona’s film, the spirit attaches itself to Piotr (Itay Tiran), a man who has traveled to rural Poland to marry Zaneta (Agnieszka Zulewska). On his arrival, to what is effectively the middle of nowhere (yet shot stunningly beautifully on screen), Zaneta’s father tell Piotr that one of his properties and the land around it will soon belong to his daughter and new son-in-law. Whilst investigating the land, Piotr finds a set of bones, which appear to be human, but he soon disregards it and throws them back down.

At the wedding party, Piotr starts to act peculiarly and whilst initially those around him put it down to alcohol, it soon becomes clear there is something much more fiendish and diabolical at play. Whilst his wife and her brother start to investigate what is going on with him by taking him to another part of the house, away from the rest of the party, Zaneta’s father gets the rest of the guests drunk as he doesn’t want his new son-in-law’s behaviour to reflect badly on him. It becomes clear that a spirit of a women who disappeared from the town sometime before has attached itself to Piotr and that the family have secrets of their own to be unearthed. 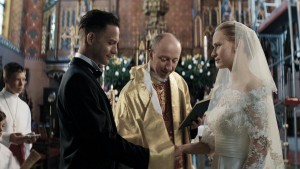 treatment it deserves (especially in contemporary horror and thanks to American filmmakers trying over and over to recreate some of the magic from the 70s and 80s) and is often relegated today as a lesser form of horror. But as far as possession films go, this is up there. It brings together old folklore, in a mysterious and haunting setting, with characters that never totally reveal themselves and their motives and the promise that by the end of the night, no one will be the same again.

What Demon also has running through it, is a throbbing vein of black humour about itself. Of course it’s never the plan to have a ghost haunting your wedding and how do you go about explaining that to the guests? So of course, it is easier to get everyone drunk instead of having to explain. The film also becomes more frantic and surreal as it continues, plot lines are often hinted at but the screenplay never feels the need to tell the audience absolutely everything (a breath of fresh air in contemporary horror) and it really gets under the skin of the audience from the quiet start to the bizarre ending.

A film shrouded in mystery, Demon is as gripping as it needs to be but also it’s a stunningly beautiful film with so much to look at and admire.