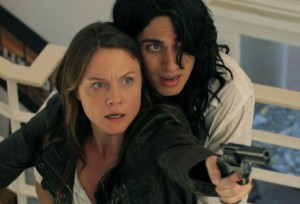 Bruno & Earlene Go to Vegas focuses primarily on two misguided individuals colliding together in the most unusual of circumstances having been spurned in the past for two wildly varying reasons. They both carry burdens with them when they meet at Venice Beach for the first time and they reluctantly latch onto each other in the hope that they’ll each have someone to trust in again.

Bruno is a directionless, harmless couch drifter who sleeps in people’s homes illegally whilst they’re on vacation. To get money he thinks about selling his body to a shady business since he appears to be uncomfortable in his own skin without thinking about the ramifications of such actions. Earlene seemingly has no current purpose in life as well and takes him under her wing since he reminds her of her past self and can’t let him go down this path. They are both fragile people in need of some company, though they don’t openly admit it at first, and so a plan is put into fruition based on fulfilling Bruno’s dream to see the Eiffel Tower which is a great piece of symbolism about change and coming to terms with something that is different. Since they are nowhere near Paris the idea is to see the replica in Vegas and so they set off on their momentous journey, for better or worse, together.

The film is unfathomably picturesque and unequivocally captures the essence of a road movie and the overbearing scale of America. The movie is lavish in its 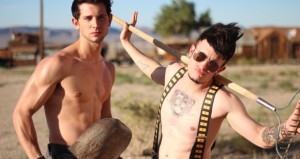 execution, despite a modest budget, whilst still retaining a certain intimacy that is essential in our engagement towards Bruno and Earlene. Although it is set against the backdrop of America there are still some great British moments to be found in the film as well which was pleasing to see.

Simon Savory, a British director, worked tirelessly hard on this film having to constantly re-write the script due to production troubles and only had two weeks to re-shoot the film in the end. He utilised his cast the best he could and they all put in a collaborative effort to make the whole film pull together in the end. The camaraderie between the actors as friends on set translates onto the screen and shines through as they all seem to be having a great time on camera which really comes across in these humorous character moments that are scattered throughout the film to keep the tone light at times that give a breather from the exploration of the more serious issues that come with self-discovery and what it means to have somewhere you fit in.

In addition to Bruno and Earlene who are expertly portrayed by Miles Szanto and Ashleigh Sumner are the additional characters introduced mid-way through the film in the little known town of Gold Point Nevada where they wile away their day as a collection of lost souls. Gold Point is a desolate wasteland with a few houses scattered in between and within this town, that’s been forgotten about and exists nowhere, are those runaways who have got caught up in its intoxicating and liberating escapism, free of life’s cruelty’s. It is these inhabitants that have a genuine understanding in the importance of getting on with a fellow human being and are very welcoming towards Bruno and Earlene, where others have failed to be so inviting in the past. The whole cast makes the town come alive at a really pivotal part of the film as there are all sorts that make up this towns eclectic range of people including but not limited to Scottish strippers, a former show girl, an alcoholic sheriff, drag queens and even drunk tourists. It is the time spent here that makes the film truly memorable. 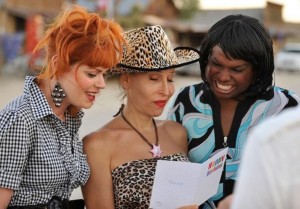 It is within this setting you can see the stories true meaning and the importance of family and the sense of home. The characters here all look out for each other and are dysfunctional in their own ways  but it’s a place that lets you start again which could be a great help to Bruno and Earlene if they let their spirits free and the residents might learn something from them at the same time. The two of them have separate things they want to achieve out of this road trip as well as the already set goal of getting to Las Vegas and the whole film is about whether they make it to their destination and whether that is ultimately important.

Not only did this film deal with a wide variety of gender-queer issues but it also puts a new spin on the pre-existing ideas of what should be in an LGBT film on its head by making some bold moves and breaking certain character archetypes and traditional stereotypes which challenges everyone’s preconceptions of what this type of movie should be which gives a fresh perspective on how the narrative is carried out.

The music selection for this film was excellent particularly the music from Arcade High which encapsulated the feelings the film evoked perfectly.

At the heart of the film it is still about Bruno & Earlene’s discovery and it is them that make the film so compelling to view. Watching their relationship 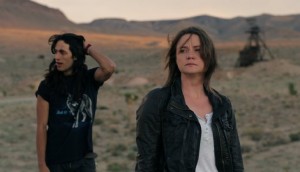 evolve over the time they spend with each other is touching and deftly done in quiet moments these two share together. The sprawling landscape matches their sense of wonder about life and allows them the time to confide in each other. Certain revelations transpire on this trip that could bring them closer or could make their friendship fall apart.

My only gripe is that the movie felt a bit rushed at times not giving enough depth and scope overall but I’ll let that go because of what has been achieved in such a short space of time. It is a charming film and a confident début that has a lot to say about our own identities and what it means to be human and how we fit into this strange and expansive world.

Bruno & Earlene Go to Vegas was seen as part of the East End Festival and was the world premiere of the feature.