Heather Tobin’s Route of Acceptance, was one of the biggest let downs for me during LLGFF – it gains one and a half stars for its interesting and innovative concept, but unfortunately, it fails on virtually all other counts.

Following Ryan Stark (played by the hugely beautiful Emily Alatalo), a young Canadian lesbian living at home with her mother, she must decide which college to go to as she enters her next stage of life. All three of the colleges that she applied for have offered her a place, and of course like all good students she must make a list of the pros and cons of going to each of the different places. She is aware that she wants to start her life, she wants to get away from home and she wants to distance herself from the uninteresting world, she believe that she has come from. When her brother comes home to tell his sister and mother that he is now engaged to Emily (Yvonne Gauthier), this is serious cause for celebration. He tells her to think about the future and this sets Ryan off to thinking.

and realities that Ryan may go through depending on the different colleges and whatever her choices are. She could end up in a marriage with an older women, which will (apparently) end in heartbreak when Ryan cheats on her, she could end up having sex with a guy who impregnates her and she falls in love with the receptionist at the abortion clinic or she may start to date Emily (her brother’s fiancé) after she leaves him… for her. But the recurring ending in all these stories is that Ryan’s mother will die of cancer… downer eh?

Another interesting motif throughout all these stories is that the relationship between Ryan and Emily is emphasised, whether directly between them in one of the fantasies where they go to the countryside together to meet Emily’s grandmother or the connection they have once she is married to her brother but she seems far more interested in finding out about Ryan. The film seems to be quite clearly making the point that certain aspects of our futures are always going to happen – perhaps not in the same way, but there are always relationships that will happen and things that need to be done. 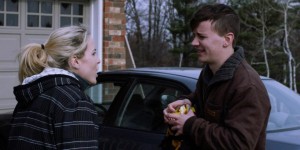 Sure this is interesting, in fact I really was intrigued by the ways in which Tobin was going to make something so many young people have to go through interesting and portray it differently, but unfortunately, the reason the film fell through was because ultimately… I didn’t give a damn about anything.

For example the relationship between Ryan and Kali (Kelly-Marie Murtha), seems so distanced from the world we originally see Ryan in, that I found it difficult to grasp any possibility of this relationship happening. Sure it could have happened, they could have met whilst Ryan was studying and then fallen head over heels in love with each other but the film places the audience at the conclusion rather the steps it took to get there. One moment Ryan is looking into the sun wondering, next, she is married to a much older woman, with red hair and lives in a huge house, which she certainly hasn’t put money in. Why should I care, or believe what is going on? Frankly I didn’t understand their relationship, and when Ryan apparently sleeps with someone else (which, you don’t realise till quite a while later), their relationship quickly deteriorates (not forgetting a lot of arguing and painting).

In terms of the acting, I very quickly understood not to expect too much from this film unfortunately. Alatalo has a big job, ultimately

playing four Ryan’s – but she is no The Parent Trap Lohan and instead spends a lot of time moaning, crying, a touch of screaming but ultimately manages to be very sexy throughout the entire film… I am thinking she was hired more for her looks than her acting skills. The rest of the cast just bumble and fumble around trying to hook onto something of interest, but alas, it never arrives. The main supporting actress, Gauthier, who plays the rather seductive Emily is really quite cardboard, sentimental and boring… Also, I never understood the appeal of her character in any of the realities. She is spoken about as if she is most beautiful and animated girl in their realities, and yet, not once does she appear interesting or worth watching.

Are their some saving graces to this picture? Sure, some of the locations and sets are pretty to look at and the director does have a good knack of not confusing the story lines throughout the film, despite being all about the same character. Tobin also, by the end, has managed to make a world somewhat engrossing that you do wonder which world Ryan is going to choose because ultimately, they all end in shit.

Like a slowly paced soap opera, with the cheesy performance and underwhelming dialogue, Route of Acceptance was hopeful but failed to intrigue where it really could have.