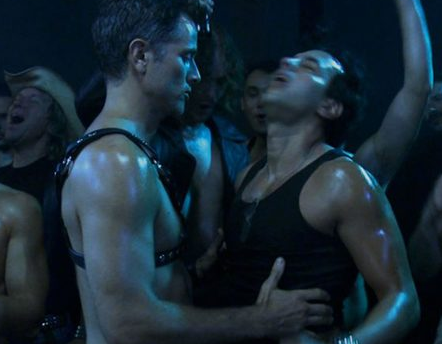 Whilst considering what the first film from this years London Lesbian and Gay Film Festival that I wanted to write about should be, I decided to quite aptly go for the one, which has had the world’s eyes upon it for months now as it continues it’s mad rampage of the worldwide festival circuit. Travis Mathews (I Want Your Love) latest has hit headlines recently due to the involvement of Hollywood star, James Franco (Spiderman, Howl, Spring Breakers) who has recently stood up for a wider representation of the LGBT community and gay sex in cinema. Whilst constantly batting away questions about his own sexuality, Franco teamed up with Mathews in order to recreate the apparently ‘missing 40 minutes’ from William Friedkin’s 1980 Cruising starring Al Pacino as an undercover detective who visits the underground gay world of sex and leather clubs.

The legend says that Warner Bros. felt these 40 minutes were too dark and sexually provocative for cinema and therefore they removed them from the film, which is a cult legend in it’s own right, garnering riots by the LGBT community for it’s negative portrayal of gay lives. Mathews and Franco’s project is to recreate these 40 minutes today, and Interior. Leather Bar is the what they ended up with, documenting the work they put into the project. 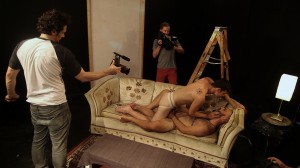 manipulated look at what happens when two filmmakers go against the grain and try to recreate something insanely alternative and out of the mainstream. Filled with plenty of Franco soapbox moments about gay sex, LGBT representation in cinema and the closed mindedness of many people in the world, Interior. Leather Bar does offer something that is rarely handed to the audience; a frank and no bullshit look at ourselves.

Franco’s friend, Val Lauren plays himself playing Pacino’s character, Steve but the moments when the camera is focusing on Val as himself are some of the most interesting and intimate moments of the entire film. He honestly cannot understand why Franco is spending time on this project and makes it very clear that he is personally pretty uncomfortable about what is going on around him. Mathews and Franco have hired a variety of professional and amateur actors, both gay and straight to take part in portraying this underground leather club, but the film appears to place emphasis upon Lauren’s uncomfortableness rather than anyone else – at the end of the day, we are unsure whether others were having the same conversation. But this is wonder of the film, although it is being given to the audience as a documentary, it is very clearly showing us what they feel we should see and I am sure there was plenty of other conversations, which probably wouldn’t have helped aid Franco and Mathews project. 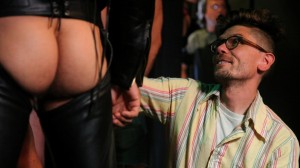 In one touching moment, Franco talks to the camera and asks why he was brought up in a world where straight sex is the norm and it can be shown in cinema, he asks, why not gay sex as well? All his work in the LGBT arena recently, also feels like a learning curve for himself as he is gaining access to a world, which many have not stepped in or are too afraid to do so. As a member of the Hollywood elite, he is very self aware; ten years ago, this could destroy a career, today it could make it. He does make very valid points, and wonders when equality will finally be seen in cinema, but seen as we are living in a world where this film can be made, we are moving very slowly in the right direction.

What I did find difficult to watch in Interior. Leather Bar was the moments where we move away from the documentary, through the camera, and to glimpses of the finished recording of these missing minutes. We enter a completely different realm, where we are no longer being spoken to but instead are witness to the project. Thrown straight into the centre, we are surrounded by a variety of sexy, burly, hairy, hairless, jocky, hunky, larger, bears, cubs, leather clad men, all covered in grease and oil. They are dancing to the music played in the club, and they are having sex – one way or another – blow jobs are covering the bottom half of the screen and for a moment, you begin to wonder whether you are watching pornography.

Now I understand the aim is to make normal, gay sex, and with Mathews previous work, including I Want Your Love, containing real sex, there 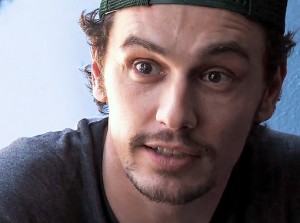 is the argument about whether this is pornography or art. With IWYL, the sex is raw and messy and sweaty, like reality (maybe I am doing it the wrong way) but in Interior. Leather Bar, it felt acted, choreographed, titillating and highly erotically charged and although, I may enjoy that alone in my bedroom, when it came to watching as part of the documentary, I felt alienated and that it jarred the progress of the film.

Certainly worth a watch, whether it be to see Franco’s involvement in the project or to join the project in seeing LGBT representation grow wider in cinema, Interior. Leather Bar promises something for the future – what that is at the moment, I am waiting to see.