Words on Screen: The Art of Adaptation

Books, pages and pages of words similar to those that you are reading right now. They have been around for about as long as I can remember (and possibly before that…) and they are used to teach, to escape, to make time pass and they look pretty sitting on a neatly compiled book shelf. But running parallel to these books are films (moving images in layman’s terms) and in recent times it has become commonplace for these books to be ‘translated’ onto the screen in the form of films. 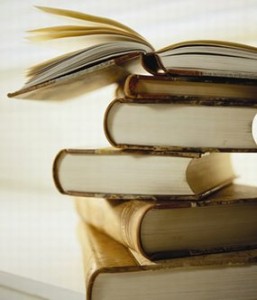 Now, the argument for books versus films does exist, much like high art versus low art or art as entertainment et cetera but many agree that the film never does the book justice. Well with recent releases like ‘Alice in Wonderland’ and ‘Shutter Island’ topping BO charts and thrilling audience and critics alike and with Fincher’s ‘The Girl with the Dragon Tattoo’ just around  corner (TBA 2011), it seems that filmmakers are taking note of the original source material and listening to what the original audience, the readers, want! 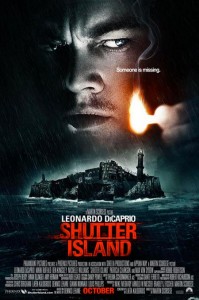 American filmmaker, Jim Jarmusch (‘Broken Flowers’) said, “Nothing is original. Steal from anywhere that resonates with inspiration or fuels your imagination.” And many agree that everything has been done and that there is no original material anymore but instead remake on top of rehash on top of restart. The wonderful thing about books is that a reader, in any time given any situation can imagine up a scene from one of their favourite books and the mise-en-scene would be exactly what they want it to be. This opportunity for such objectivity does not come around too often and some argue that a filmmaker is simply putting their stamp on top of another’s work with their own vision. (Sorry to offend fans, but ‘The Lovely Bones’, anyone?)

To this end, here is just a couple of literary adaptations from the last decade which I believe have been successful in executing its work and point with the correct balance of detail from the source text as well as a filmmaker’s unique vision. 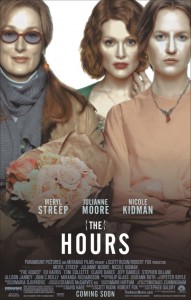 For me, step one of an adaptation is that the film should complement the book and I don’t believe a film has done this greater than Daldry’s 2002 adaptation starring Nicole Kidman, Meryl Streep and Julianne Moore. To create the ideal balance the filmmaker should not alienate either the original book audience or the new film audience. Don’t expect your audience to have read the book and take out necessary detail because you believe the audience already know it… but at the same time, don’t bore the audience who have already read the book. This is why I think ‘The Hours’ does this perfectly. Daldry has taken Cunningham’s text and put on screen images rather than whole notions about what the book is about. A story which follows three stands, three periods of time with three women who are all connected by the story of Mrs Dalloway written by Virginia Woolf is already just and balanced in its allegory and metaphor from the text. An abstract book with controversial themes on screen could have been done completely wrong, but I imagine it would take someone very particular to see this on screen.

A stand out scene for myself is when Mrs Brown is in the hotel room, she falls asleep and the bed on which she sleeps becomes immersed in water. This scene, a metaphor for whatever is going on the characters’ mind at the time has on screen become a spectacle in it’s own right without forgetting it’s original text. It forges ties with the novel and although it updates and forgets some unnecessary detail which is needed for words but not for the screen, this adaptation does succeed for myself in showing the true vision of a heart breaking story. 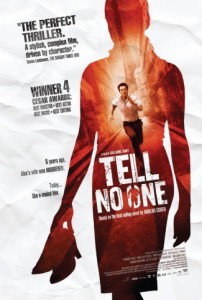 Based on the crime novel, ‘Tell No One’ is a simple enough premise. Alex Beck’s wife was murdered by a serial killer eight years ago, today he receives an email from his wife and footage showing her alive and well… What?

The next step for me in adaptations is how well they translate. This could be quite literal, from book to screen but what makes this film even more impressive is that it’s source material was American, with American references and knowledge and the film was directed by a French director and set in France. This move of culture only adds to what Coben’s original vision was for the story. The way in which this film is so multicultural and yet so French at the same time, reminds it’s international audience of it’s location and as well as playing out this crime thriller, takes the audience into new places that most have not seen before.

The film topped many top 10 lists in 2008 including Marc Doyle at metacritic.com and Stephen Holden at The New York Times. 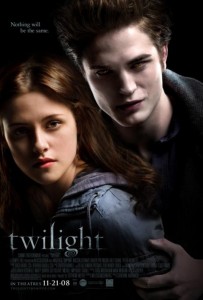 I’m not going to lie… I read the book in about three days and as soon as I finished the book, I put the film on to compare. I didn’t have any hopes for the book in the first place (despite getting the first three in paperback as they were on special offer), as I didn’t have very much idea about the story but just knew it was a new faze that was sweeping the world and I wanted to see if I could be a part of it.

Yes, the story is for teenage girls, but tell that to the (probably) millions of readers who aren’t teenage girls and who are still fascinated by the tale of Edward and Bella. The many twists and turns which take place throughout the tales and the history of the vampires which Meyer manages to make so interesting. By having studied older texts and seen what was written before, she takes the stereotype and does away with it. These are vampires for a new generation.

As well as being about to compliment each other, I believe the book and the film must take their best parts from each other. It is very easy for a director to read the book and select their favourite sequences or ask around and put on screen what they believe to be the most captivating or the most thrilling. But books are filled with pages of filler, they always have and they always will, it’s needed to stretch the story and in its own way it adds intrigue into the mix. For me, ‘Twilight’ although not an ideally great film in itself (although lessons have been learnt as shown in ‘New Moon’), does manage to twist and turn its way through with the book. Certain sections which I believed to have been boring on page, become fascinating on screen and vice versa (unfortunately, I was disappointed with the finale of the film versus the book!) and sections which were particularly ‘girly’ in the book (Oh! Edward how my heart flutters for you!) were done better in the film to gauge a wider audience. 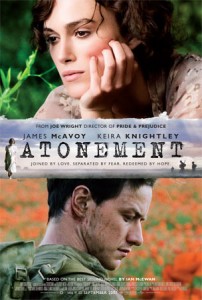 Now, I may get a stoning for this from some readers but another point that makes adaptations successful is when the film is actually more captivating than the book. (Hush! Yes, I said it!)

I’m not going to lie, I did not even make it half way through the book and I will try again in the future when I have a moment to spare (it is on my shelf and getting closer to being read), but sometimes an authors writing just doesn’t suit the reader for whatever reason. An author is sometimes like a good pair of shoes (damn those cliches!), but seriously, when you find a good fit, it is great!

For me, I couldn’t complete this book which has been an international success as I just could not get to grips with McEwan’s writing. I felt it too descriptive for passages which could have been over with much quicker and the narrative flow didn’t work for me as I was left standing on the barge looking out to sea and wondering what was going on…

But then the film came along and I was as eager as a beaver to watch the adaptation starring Keira Knightly and James McAvoy. Some may argue at this point that the film is the easy way out for those who didn’t quite understand the book or for those who couldn’t be bothered but I argue otherwise. What an honour to Ian McEwan that his text was translated throughout the world on screen, for people to see. So even those who didn’t want to read the book, didn’t like the book, couldn’t be bothered… the list goes on, they still could take Joe Wright’s viewpoint on face value and enjoy the story.

The film itself is a beautiful mix of cinematography which was why it won such a variety of awards including Best Film at the 2008 BAFTA’s and was nominated for Best Film in the same year at The Oscars. The music and costume design were some of the best from that year and the acting from not only the two main protagonists but also from Saoirse Ronan and Vanessa Redgrave blew many other performances out of the water.

So there you have it, in just four easy steps we’ve gone from book to screen. As I have already said, although many agree the book is usually better it just goes to show that sometimes, given the right skill from a director or actor or screenwriter, the balance can be found.