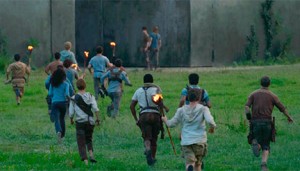 Based on the book by James Rashner, The Maze Runner is the latest in a long line of 21st century teen novels to be given the blockbuster treatment. New director, Wes Ball, creates an intriguing and exciting world and it’s certainly fun, even if you do leave the theatre wondering what on earth the point in it all was. Perhaps, that in itself was the point?

16 year old Thomas (solid performance from Teen Wolf’s Dylan O’Brien) wakes up without a memory in the middle of a large mechanical maze. In the centre, a group of young chaps who remember only their names have built a life around mutual respect and hard work in their supposed safe zone which they call The Glade. There are cliques – of course there are, it’s a teen movie – the most important of which is the so-titled Maze Runners. Their job, yeah you guessed it, is the run into the maze, mapping the hefty puzzle and trying to find a way out, so far without a degree of success. Don’t worry though, it seems Thomas may have what it takes to save the day despite not showing any special qualities beyond looking cute and shouting his mouth off at boys bigger than him. Swoon, young ladies, swoon. Later on in the film the ever more mysterious and pointless Teresa (Kaya Scodelario) arrives in the cage, which brings each new citizen as well as monthly supplies, with a worrying note and time is suddenly against them. No more time to waste with fight club-esque rituals and making hooch boys! Cue tense music and monster machines called Grievers which were the most original entity in the film and quite frightening in their gooey half worm, half robot spider way. The ending is obviously incredibly cryptic, where everything the viewer who hasn’t read the books thinks they’ve learned to make sense of all the running around and yelling becomes just another big fat question mark.

That being said, it was a fun ride with some sweet performances from blossoming actors, especially Will Poulter and Thomas Brodie-Sangster (Love Actually), 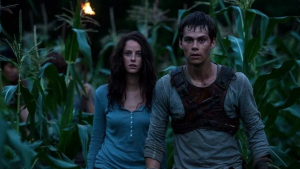 whose voice has dropped though his delicate style of delivering lines is still apparent. Ki Hong Lee plays the leader of the runners, Minho and is thoroughly convincing as his heroism is outshined by the cocky Thomas. The design for the gargantuan labyrinth is impressive with blocks born for Tetris and ever changing walls, even if it does turn out the be a Hunger Games type of deal… I’ll try not to say too much. Unfortunately, for me, all these good things were just overcome by the solemn pointlessness of it all. There were audible giggles at ridiculously hard looks from lads unable to grow beards but apparently trying to keep their testosterone in check. Though admittedly these giggles came from a perhaps older audience than the film is aimed at with it’s 12A certificate.

It’d be great to see a film aimed at young adults that doesn’t create a hero at the expense of everyone else, or expect their young audience to be locked in with a few pretty faces and not an ounce depth… though I suspect this fast paced film will get a lot of love with it being chock full of cutie pies and angst. I mean, Twilight did obscenely well.

I do look forward to the sequel so I can understand just what the actual hell is going on.