So Sunday 17th July 2011 was a date to put into the diaries as it was the UK premiere of Disney Pixar’s Cars 2. The newest sequel to be released from the studio who just gave us Toy Story 3 and are due to release Monsters University. The film stars Owen Wilson, Larry the Cable Guy, Michael Caine, Emily Mortimer and Jason Issacs.

In the film, race car Lightning McQueen and tow truck Mater head to Japan and Europe to compete in the World Grand Prix, but things end up a little out of control when Professor Zundapp plots to secure oil profits and British spies Finn McMissile and Holley Shiftwell get involved. The film is directed by John Lasseter (Toy Story), co-directed by Brad Lewis (Ratatouille) and produced by Denise Ream (Up). Cars 2 is also the first film John Lasseter has directed since the original Cars in 2006. 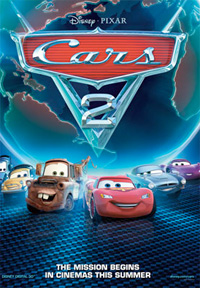 Right, so admin out of the way I can finally let you guys a little into the world of a movie premiere, thrills and all. Alexander Rowland and myself made the trek (from different directions) to Westminster, London and decided that it wouldn’t take too long to get Whitehall Gardens (or at least my Blackberry told me it wouldn’t)… how wrong were we? Actually, the question was, where were we? After a bit of faffing around, it was looking like it was going to be a warm and sunny day, again… how wrong were we? It was a good job that we had both remembered to bring umbrellas to the event, one for our bags and one to cover ourselves with. Once we arrived at (second attempt) Whitehall Gardens and were handed our press passes (cue: over necks); we walked around the gardens where the finishing touches were being laid out on the ground to look like a race track, where the gazebo stood filled with signs and spectacle alerting everyone about the film and where crew were (every so often) wiping dry a life size model of Lightening himself!

Alex and I found ourselves behind the press barrier with big names such as the Disney Channel, ITN and Wired Magazine and we gazed as the major outlets were getting their presenters, boom mics and cameras ready for when the guests arrived. We got our camera (yes, we were very professional) and discussed briefly the types of questions we were going to ask. The sun was out and it looked set to be a great afternoon with some really interesting interviews. And then the clouds descended (as the soundtrack was being played over loudspeakers) and in true British fashion, the rains poured down and the Dance of the Umbrellas took place before our eyes… and this was just as the guests were starting to arrive.

From the looks of the list, there was a very varied bunch of people coming, from Emma Bunton (amongst others, with their kids), to some of the cast of Made in Chelsea and The Only Way Is Essex (with their new found fame!), to the actual reason for being at the premiere, the cast. As you will be able to see from our interviews below (we managed to capture them on video!), we met Jason Issacs (freshly squeezed from Harry Potter premiere), the director, John Lasseter, producer, Denise Ream and the legend that is Sir Michael Caine.

Though it’s sad to see Michael Caine continue his exploits in animation (as he’s such a magnetic and iconic screen presence) it’s lovely to see him making a movie with his grandchildren in mind. And there’s no doubt that Cars 2 will appeal to and be enjoyed by younger audiences. As an animation spectacle it’s definitely a dazzling experience. As Caine suggests the movies that Disney, Pixar and others like Ghibli produce are far beyond mere cartoons, they’re fully realised stories that do perhaps defy the contemporary cinematic lexicon. At any rate we can’t wait to see him in the upcoming The Dark Knight Rises and, as he says, any future Nolan projects with the director not making a film without Caine since 2005. Moreover it’s wonderful to see the likes of John Lasseter, Denise Ream and Jason Isaacs as enthused about their projects and characters as we are thrilled to watch them. All in all a fantastic day with some great interviews.