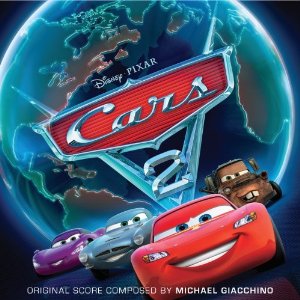 Don’t be mistaken thinking that Disney Pixar’s Cars 2 is simply a sequel packed to the brim with top-notch computer animation, world-class grand prix racing and levels of international espionage that would have the likes of James Bond weeping with jealousy.

Sure, everything mentioned above will have fans racing to theatres on July 22nd to catch the second serving of Disney’s fabulously fast-paced blockbuster Cars but there’s something else that adds the extra Va Va ‘Vroom’ to John Lasseter’s latest release.

With a renowned line-up of international musicians all contributing to the soundtrack, Cars 2 presents a smooth score for the ears. Oscar and Grammy award-winning composer Michael Giacchino continues his association with Disney on this film, which marks the fourth Pixar feature film he scored after Up, Ratatouille and The Incredibles.

Director John Lasseter says:  “Michael is doing such a cool score for the film. We did not want to do a typical spy movie score. We wanted it to be something very different–a whole new approach.”

The Walt Disney Records soundtrack was released only yesterday and it’s undeniable that Giacchino’s cool compositions provide a perfect backdrop for the touching tale of friendship, which sees star racecar Lighting McQueen and buddy Mater travel the globe to race in the World Grand Prix series.

Giacchino believes his Disney counterparts are responsible for the success of the soundtrack: “John Lasseter knows what his 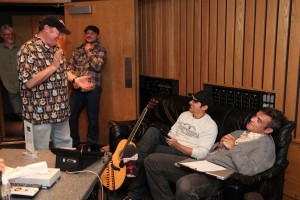 characters need and what they want. That’s how to discuss music—in emotions. I love working with the people at Pixar because they all talk in terms of story and that’s how I love to work.”

Along with Giacchino, Grammy-winning country superstar Brad Paisley also returned with two new scores for the sequel, whichinclude a rock ‘n’ roll themed collaboration with UK pop legend Robbie Williams (pictured right). The duet entitled Collision of Worlds is featured over the ending credits of the movie. Williams says: “It’s an international kind of song that’s inspired very much by the film–it wouldn’t exist if it weren’t for the story.”

The star-studded soundtrack consisting of 26 original songs is now available for digital download. And if you wait just a week longer, you can experience the scores in their full glory as Cars 2 speeds into cinemas on July 22.