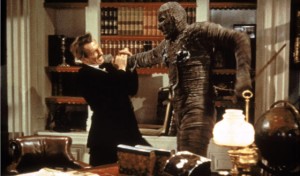 essentially the same story but it may well be the best. The 1932 effort starring Boris Karloff may be the original but it is incredibly staid by modern standards and the 1999 effort suffers from a hideous case of Brendan Fraser. This version features Peter Cushing and Christopher Lee in the iconic leading roles which should be more than enough to intrigue most cinema fans, though the mummy is no longer as fearsome as it once was, the 1999 attempt can call on far more expensive and impressive techniques to add the fear factor, but it certainly makes for fun viewing and DVD collectors will be delighted by the superb extras on offer in this Hammer/Icon re-release.

It all begins in Egypt of course as the Raiders-esque score from Franz Reizenstein plays over archaeologists digging their way into the ancient tomb of Princess Ananka, lost for thousands of years. In doing so they disturb an ancient curse which sets the mummified corpse of high priest Kharis (Christopher Lee) on a murderous path against the two that defile the tomb as well as the incapacitated John Banning (Peter Cushing) who had been left behind. In what is now classic fashion, the archaeologists are warned by a mysterious 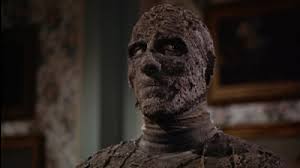 Egyptian of the curse that will be laid on them should they continue their work but ignore it in excellent “I must add more stolen things to the British Museum” style. Henceforth the mummy is brought to Britain to exact revenge by religious fanatic Mehemet Bey (George Pastell) only for Banning’s wife Isobel’s (Yvonne Furneaux) likeness to Ananka to distract him.

Of course there is lots of hammed up acting, as is the standard in older horror movies, but The Mummy has some excellent performances that allow it to rise above the more mediocre pack. Christopher Lee excels in moody brilliance as Kharis, particularly in the historic flashback sequence, and of course Peter Cushing doesn’t do average. His exchange with George Pastell as the two debate the merits and morality of archaeology while both knowing the other is a danger to them is electric, the movie is worth it for that scene alone, both performers delivering their lines with intensity and 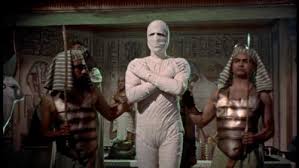 Terence Fisher directed many Hammer Horror films but he is the legend behind their three classic Gothic Horrors, helming The Curse of Frankenstein (1957) and The Horror of Dracula (1958) before turning his attention to the Egyptian tale. This offering may be slightly weaker than and certainly not as horrifying as the first two but it remains a classic and deserves the reverence it is receiving from this re-release. It has been part of Gothic horror shows at the BFI Southbank and suitably part of the Monster Weekend at the British Museum, so The Mummy remains at the forefront of classic horror in this country.

The Mummy will be available on DVD from October 14th Courtesy of Hammer Horror and Icon Film Distribution.