Illumination is a tricky one. In many ways absolutely absurd and nigh on impossible to comprehend but in others it is a complex and innovative work that tells a simple story of a man searching for enlightenment. However if you are no way interested in the variety and experimentation of Eastern European cinema you should probably give this one a miss. Writer/director Krzysztof Zanussi is not interested in a conventional storytelling style but instead laces his dialogue-light script with moments that jar the film out of any fluid rhythm. Illumination requires some work to get under its skin but it can be rewarding. Zanussi’s film is nowhere near as accessible as say the Czechoslovak new wave of the 60’s and 70’s but it is a must have for any fan of the immediate region’s important cinematic works.

The narrative of Illumination is relatively simple, one of a man searching for his place. The rather self-absorbed Franciszek Retman (Stanislaw Latallo) is desperate to find scientific explanations for everything, especially concerning issues in his own life. Meanwhile he marries, has a child, works and studies and through these everyday things learns more about himself than science can explain. He is a highly intelligent man who excels at physics but could have done anything, his curiosity knows no bounds, Retman’s story is an 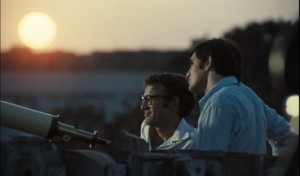 interesting one and Zanussi captures the intimate moments of his life. He is a man whose mind is so wide open that it is difficult for him to choose a path. Close-ups unlock a man full of reflection and angst, Zanussi’s film is very of its time, wonderfully smooth wide angle shots complete the quintessentially 70’s aesthetic. He gazes at the minute, skin against rock, as well as the gargantuan, the daunting tasks that face Retman.

For all this the film never gains any true momentum. The breaks in the action to have real life scientists discuss the virtues of modern genetics over physics and to have others explain the kind of reactions occurring in Retman’s brain at a given moment are jarring. Experimentation is rife throughout the film, particularly in a hypnotic scene at a drug-fuelled party but so often these scenes and the uncontrollable score are to the detriment of the film. Some of the visual metaphors work very well, a fish out of water, suffocating, perfectly emphasises the neurotic overload that is occurring in Retman’s mind in times of trouble. But for every experiment that works, there are many that fall flat. 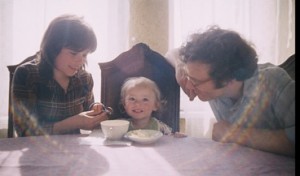 Experimentation is important, certainly the judges at the Locarno Film Festival though so in 1973 where Illumination was the winner of all three of the main prizes, but it comes at a cost. Possibly 30 years ago, Illumination seemed fresh and invigorated, something not quite perfect but something that shook up some established film motifs, but perhaps time has taken its toll. It is somewhat akin to Terrence Malick’s Tree of Life, experimentation that riled some viewers but entranced others, but with a simple and moving core narrative. Though Malick’s film is far more polished and lyrical than Zanussi’s it is hard to deny it could have been an influence, even more difficult to remonstrate against the closing scene inspiring a young Darren Aronofsky.