Riddles of the Sphinx/Penthesilea: Queen of the Amazon DVD Review
Home
DVD/Blu-Ray

Riddles of the Sphinx/Penthesilea: Queen of the Amazon DVD Review 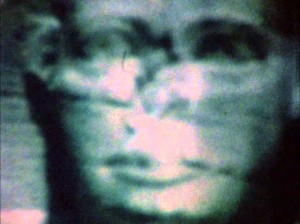 British Film Institute re-releases are often a cause for celebration amongst cinephiles. Described as “one of the most important avant-garde films to have emerged from Britain during the 1970s”, the re-mastered Riddles of the Sphinx could well be the latest in this long line. The film is a clear attempt to do two things: 1 negate the conventions of the Classical Hollywood Cinema; and, via this action, politically explore issues of women living within a patriarchy. Central to these ideas are two stories that have continually told by male voices: the myths of Penthesilea, and Oedipus. This, therefore, is a film that has more to do with political ideas and film theory, than about character or plot.

Before I talk about Riddles, the disc also includes Laura Mulvey and Peter Wollen’s first feature Penthesilea: Queen of the Amazons, a curious little film that is divided into 5 distinct parts each introduced by a quotation. The first of these (prefaced, for example, with ‘Ghost white like a not yet written page – Mallarmé, Mimique) is a mimed snippet from Heinrich Von Kleist’s stage adaptation of the Greek myth of Penthesilea, shot with a stationary camera looking down onto the stage. This opening does serve a purpose (as the other four parts all comment on it), but it’s lazily constructed. It looks like it would be a very interesting piece of theatre, but a stationary camera pointing at a stage feels like a meaningless gesture to me, particularly when it makes up almost a quarter of the film.

The second part is a direct-address lecture delivered by Peter Wollen whilst he moves in between a terrace and a living room. He dissects theoretical ideas behind the film, Kleist’s play, and the myth of Penthesilea. Simultaneously the camera takes it’s own independent trajectory within the same area and occasionally focuses in on Peter’s discarded cue cards. Again, the ideas are fascinating, but while the camera confusingly wandered around the house seeming unsure where to hover or how to move (and I understand that this is a kind of Brechtian device intended to bring the audience’s attention to the machination behind the movie), I wasn’t awed by my awareness of the medium. I was just thinking: this isn’t really cinema.

The third and fourth parts are far more interesting. The former is a montage of images of Greek statues, friezes, and vases (as well as frames from a Wonder Woman comic book) depicting violence against women, over the top of Berio’s “Visage”, a soundscape of wind and incoherent wailing (perhaps symbolic of the lack of an expressive voice for women). The physical damage to some of these artefacts adds a further visual metaphor. The latter is a silent black and white film – What 80 Million Women Want (1913) – featuring scenes inspired by the suffragette movement, upon which a woman’s face in colour is superimposed, speaking the words of feminist Jesse Ashley. In this reviewer’s eyes, these are (finally) some interesting and justified uses of the medium.

The final part is a very bizarre summation: four black-and-white television screens simultaneously screen first four sections of the film, the camera occasionally zooming in on an individual screen. Eventually all the footage is replaced by new footage which features the stage actress portraying Penthesilea in part 1 returning to her dressing room, taking off her make-up, and addressing the camera. She announces that women have their own language, eyes and weapons.

The film is described by Mulvey as “a kind of prologue” (in Kleist’s play, Penthesilea is referred to as ‘”this riddling sphinx”) with Riddles addressing similar issues, but focusing specifically on motherhood and a further eschewing of the phallocentric cinematic conventions of Hollywood. And, though similar in many respects, Riddles of the Sphinx is a far more compelling work.

It too is separated into chapters, which are punctuated with Godardian-style number slates. And part two presents Laura Mulvey giving a direct address lecture, much as Wollen does in Penthesilea. Following this is shaky stock footage of the Egyptian pyramids and Sphinx with Mike Ratledge’s foreboding synthesised score teasing the audience into looking for answers. Here, the very subject is laid out in front of us; a puzzle to try and figure out. There are repeated shots of the sphinx’s lips, zoomed in to the point whereby all that is visible is mere grain – a clear confrontation the medium and its ability to represent.

The most substantial (and most captivating) part of the film is chapter 4, the story of Louise, a housewife and mother who leaves her husband and is thus forced into work.

This part of the film is stunningly shot in 13 slow pans around the claustrophobic spaces of domestic duty with more of Mike Ratledge’s minimalist electronic arpeggios evoking a sickening anxiety. A cryptic voiceover describes these duties, in a fashion that sounds like a cross between Radiohead’s “Fitter, Happier” and Mark Renton’s monologue at the beginning of Trainspotting. One of the great assets of Riddles (as opposed to Penthesilea) is cinematographer Diane Tammes, whose work turns what could easily have been an incoherent and dull didacticism into an enthralling piece of cinema. 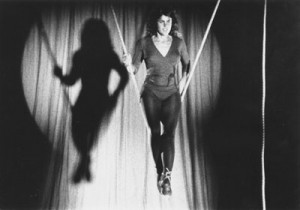 In the fifth section several women perform acrobatic feats under expressionistic lighting. In these scenes (which are psychedelically coloured) it is almost as though the female form is being punished – its limits, physically, are exhorted. After this, Mulvey one again addresses the audience with a well-articulated polemic and the film ends with a close-up on a maze puzzle which is tilted in an attempt to manoeuvre a mercury blob into the centre. It is a frustratingly slow process, but strangely mesmerising and finally satisfying.

This is a re-release that remains both culturally significant and politically vital even in the contemporary world. There is no doubting that its political motivations are well founded, and cleverly framed using the two myths. In fact it is surprising how relevant (and worryingly, how controversial) some of the ideas and arguments that are raised here still are. There is also no doubting that it was a film that brought British cinema up to date in the 70s, challenging the conventions of Hollywood (in a fashion that influenced by Godard and Straub). Whether it succeeded in creating a cohesive new film language, however, remains questionable.