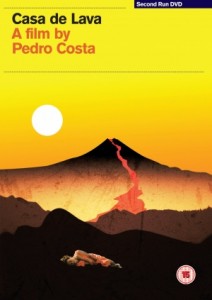 Translated literally as “house of lava”, Casa de Lava (1994) was curiously titled Down to Earth in the US. On the one hand, that’s a patronising assessment of the film’s focus upon the peoples of Fogo, an island in the Cape Verde islands, though on the other the film itself risks patronising its subjects. The second feature directed by Pedro Costa, the film might indeed embody a dichotomy between touristic awe and artistic confusion. It’s a provocative and ambiguous film, and is released by Second Run here in a new HD restoration overseen by Costa himself; it joins the director’s 1989 debut O Sangue on the DVD distributor’s roster.

Described as a ‘rethink’ of Jacques Tourneur and Val Lewton’s 1943 horror I Walked With a Zombie – its auteurist stamp falling shy of the industry’s more easily pejorative term, ‘remake’ – Casa de Lava follows Mariana (Inês de Medeiros), a young nurse in Lisbon who accompanies construction worker Leão (Isaach De Bankolé) back to his home island following a workplace accident that puts him in a coma. On the island, Mariana balances time between overseeing the hospital ward in which Leão is held, searching in vain for relatives who might take custody of him, exploring the volcanic terrain and befriending its inhabitants. One of the latter is the son (Pedro Hestnes) of white islander Edite (Edith Scob). As the volcano that towers over the immediate town never erupts, Mariana’s relationship with Edite’s son never quite blossoms – though they eventually have sex on the beach, Mariana seems increasingly connected to her alluring inherited patient, Leão.

Leão wakes up halfway through the film, a scenario not included in the original script: following an alleged altercation with his star De Bankolé, who protested against spending the entire film in a coma, Costa began to improvise. An alien in his own land, Leão resents his return to Cape Verde: though Mariana has been enchanted by the island and its folk, she has overlooked the extent to which its impoverishment is the outcome of colonisation by the Portuguese. Comatose, immigrant worker Leão has been transported back to the scattered archipelago from which he sought escape; throughout the film, other inhabitants wish to make the same journey, in need of an economic stability that contrasts against Mariana’s choice to remain on the island, which seems to be more for aesthetic purposes. If her geographical journey in the film makes her an immigrant of sorts, her reason for being there becomes increasingly tenuous; asked by natives why she isn’t back in Lisbon, she evades and eludes. 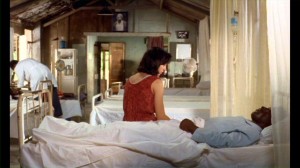 Suggestive and elliptical rather than plain and direct, the film itself seems to echo Mariana’s aesthetic, almost exploitative fascination with the island and its people. In the same way, though, there is also a brooding undercurrent that seems, at the least, to speak to – or on behalf of – Leão and his fellow islanders. The first time we see Leão smile is the first time De Bankolé enters the frame, on a construction site in Lisbon. Playfully sparring with colleagues, his merriment is clear. Thereafter, though, unhappiness prevails; an angst bubbles beneath the surface of the film, and eventually comes to dominate its narrative, as it scatters into a succession of non-sequiturs without resolve. (Leão smiles once more, when enjoying a musical skit with Bassoé, the man who may or may not be his father.) Indebted to a 1940s RKO picture, the film utilises a western framework and splinters it into something more sinister and provocative. Tonally and thematically recalling Claire Denis’s 1988 debut film Chocolat (also starring Isaach De Bankolé and featuring a symbolic, almost phallic mountain in many scenes), Costa’s second feature is a teasing and serious work.

As Mariana, the Lisbon nurse lost in translation (forever demanding that Creole-speaking islanders “speak Portuguese”), Medeiros carries a tremendous burden. Hers is a quiet beauty, displaying a vulnerability and curiosity that finds strength in the enchantment and danger represented by the Other – or, perhaps more significantly, in her own traumatic realisation that she herself is Other. Her petite, physical frame is subjected to threats throughout the film, but it also provides her with a means of control and authority: early in the film, a young local boy attacks her on the beach but is chased off by a dog, while later, she keeps Edite’s son at bay by succumbing to his advances only to then reject him. Wide shots, later in the film, remind us of a geological perspective that dwarfs the human story. Walking with the same purpose/aimlessness with which she strutted down a street earlier in the film, Mariana walks up the path of the island’s volcano, Mt. Fogo. If in the earlier instance the camera followed her like a loyal dog, here it resists such compliance, viewing Mariana’s movement through a static viewpoint from afar. Unsure of her story’s end, Costa inclines toward a “removed” vantage point that is more aesthetic than political.

Second Run’s DVD release is excellent. Restored by a team at Tóbis Portuguesa, Emmanuel Machuel‘s cinematography is crisp and colourful, its palette of primary colours complementing the raw, minimalist essentialism of Costa’s characterisation. The disc includes a supplement filmed at Tate Modern, in which Costa speaks about the film; a scrapbook feature that collects material Costa gathered during the film’s production, set to music by Raul Andrade (who plays Bassoé in the film); a 2012 interview with cinematographer Machuel; and a 12-page booklet featuring an essay by Jonathan Rosenbaum, who provides an insightful analysis of this often abstract film.