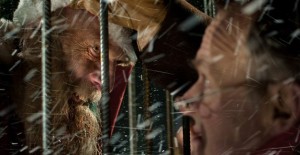 Directed by Jalmari Helander, Rare Exports: A Christmas Tale is several things at once. It continues the Scandinavians’ tradition of knocking out pleasantly subversive coming-of-age yarns in line with 1985’s My Life as a Dog, featuring a young protagonist whose voice is ignored and whose imagination is mocked (until, of course, he turns out to be right all along); the film is also an “anti-Christmas Christmas film”, should such a thing exist; finally, besides other appeals, it’s welcomingly short and sweet, in addition to having a darkly comic horror edge. What isn’t to like?

Well, a lot of things, unless you take the film’s eccentricities as they come and run along with them – and for a film that runs less than 80 minutes, resisting too harsh a blow is probably in everyone’s best interests.

That said, this is at times clumsily told; its quirkiness is worn as a thin veil for sugary sentiment; cliché lingers not far beneath its “dark” veneer; it never quite attains genuine suspense in withholding information; its narrative threads are made too convenient for its more mature pretensions to fully blossom; and, whilst not a criticism per se, viewers can make what they will of an utter absence of female characters in the film – one reading has the apparently cynical exploitation of Christmas for commercial purposes as a cash-in on the part of capitalists whose private property has afforded the male sole narrative rights – women don’t get a look-in.

Set in a remote region in Lapland, Rare Exports follows young Pietari (Onni Tommila), whose dad Rauno (Jorma Tommila) is devastated when the herd of reindeer on which his livelihood depends is found slaughtered not long before Christmas. Rauno and his two friends, Aimo (Tommi Korpela) and Piiparinen (Rauno Juvonen), suspect it is the work of hungry wolves, but Pietari fears scientists carrying out secret excavation work atop a nearby mountain have unearthed a sinister creature; not only that, but Pietari believes said creature is the real Santa Claus, who, contrary to popular folklore, doesn’t reward children for being good but severely punishes those who’ve been naughty.

By turns mystery, horror and adventure film, with a developing father-son undercurrent, Rare Exports was original enough to garner unexpected commercial success upon its theatrical release last year, and its DVD and Blu-ray release a whole eleven months later indicates an intended push to Christmas buyers.

The extent of the film’s charms probably comes down to viewers’ personal tastes; I was left baffled.

Rare Exports was released on DVD and Blu-ray November 7.