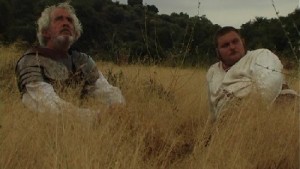 For its 95 or so minutes, Don Quixote (Lluís Carbó) and squire Sancho Panza (Lluís Serrat) live out a seemingly aimless existence in the sun-soaked country. As dusk follows day and night precedes dawn, the two lounge about, sleep, hail the sky and thank God, swim, and so on. Quixote orders his protege about a lot; the latter barely speaks. Lengthy bouts of silence – but for the afternoon breeze and the sound of crickets – lend a quiet calm to the relationship; the unsaid dependency is evidently mutual.

Such a synopsis might be the first clue as to the film’s stark minimalism, but it’s just one symptom of an overall formal audacity. For starters, Cervantes’s novel is one of the most recognised works not only of the Spanish Golden Age, but of the literary canon in general. Packed with incident, the work is a picaresque epic spanning two volumes written across ten years, and encompasses many themes with eternal resonance, including chivalric adventure and the nature of reality and things as they are. By comparison, Serra’s film contains no such incident, and unfolds as a succession of tranquil passages in which – to reiterate – not a great deal is done or said.

And yet, the film enthralls, in large part due to its imagery: Christophe Farnarier and Eduard Grau‘s cinematography is all the more revelatory for being digital. Early evening and night shots are particularly impressive; in one scene, we sit captivated by the incredible juxtaposition of Quixote and Sancho sharing an ennui as the orange-pink moon rises behind them in real time, its movement imperceptible. 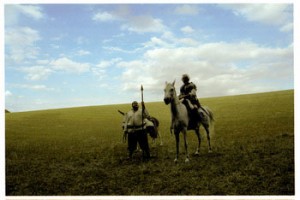 Of course, digital lends a rawness to the Malickian naturalism. A period piece in the loosest terms – it had a reported budget of €300 – the film has a unique sense of performativity, as if cast and crew are simply play-acting over the course of a few days. This is magnified by the minimal inclusion of props, costumes, extras; of, in other words, the all-out pomp that helps seduce viewers into dramatically plausible cinematic reconstructions of history.

This elevates narrative simplicity and dramatic inactivity, so that facial and bodily gestures take on sustained significance. Like The Turin Horse, which screened at the AV Festival last weekend, the minimal plot allows new information a certain resonance: the mysterious dawn entrance of four other knights on horseback, or Ferran Font‘s gentle guitar, which cues the film’s epilogue.

Honour of the Knights has two concurrent things going for it. One, already mentioned, is its visual textures; the other is its casting. Bringing their remote landscape to life and imbuing their central relationship with warmth and intrigue, Carbó and Serrat are excellent in an intangibly humorous way; while the former – a less suave kind of Fernando Rey – combines agitated jolts with teacherly concern, the latter resembles that upshot who knows the real soul of wit is silence itself. Together, the two bring a sense of self-reflexivity to their roles: the film develops like a contemporary search for imaginary adventure, all of which is occurring elsewhere, in ellipsis. Remarkably, neither is a professional actor, which is itself a provocation to the notion that canonical works and the characters that inhabit them are the stuff of – and for – stars.

To a Spanish speaker, however, the most immediate provocation might be Serra’s decision to shoot the film in Catalan, his performers’ (and his own) language. Also shot in Catalonia itself, the film brings into question the essence of its literary source. Serra would seemingly be of the opinion that such paring down facilitates an emphasis on the relationship between Quixote and Sancho, which in titular terms is that of knight-servant – though here it’s more teacher-pupil, or even father-son. Either way, it transcends geography, and also, perhaps, history.

Even when it risks a longueur too many, Serra’s film is novel in many ways, aspiring to the elemental and achieving a quieting demystification; it also doubles as a lesson in efficient and effective low-budget filmmaking.