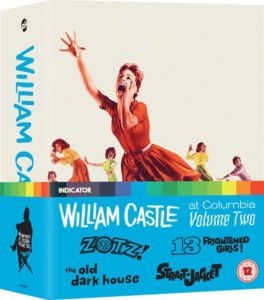 Powerhouse have returned to William Castle work at Columbia with this second boxset. William Castle enjoyed being a skilled marketer in film. From electric buzzers in chairs to ghoul glasses, then gold coins and fake axes from the screen to the stalls in one single swope. This set brings back to our screens, 4 films from 1962 – 1964. Starting just after the 4 films from the previous set films. From the Comedy eccentric zinger ZOTZ! (1962) to the tongue in cheek spy film 13 FRIGHTENED GIRLS (1963), by way of remake of the classic THE OLD DARK HOUSE (1963) and British studio Hammer (do not forget!) and finally hack and axe, crazy lady classic STRAIT-JACKET (1964). Now we get a stunning boxset, with lovely box art. Lovely disc art and booklet artwork as well! However what do we get inside the discs themselves? 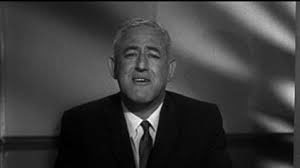 Or Zingers and Zappers

The power of a gold coin is a strange thing. It can buy you many things and enable you to better your life. It can also be difficult and complex for many reasons. However for Professor Jonathan Jones (Tom Poston), when he recieves a coin, its more than he expects. He becomes powerful. He becomes able to do things that humans cant. Is he a god? Is he imagining these powers?

William Castle could have gone two ways with this film. A story about powers of a man given gifts to him by a god. Either he could have made a broad, comic film about the zany or he could have made a meta film that was for a selct audience. We know that with the master showman, we would get the former. A film that is comic over cautionary. Kat Ellinger unravels this in her commentary as well as how the whole of the marketing campaign Castle engaged in, was driven by this choice. I have to say that Zotz works very well because of this. Castle understood what can work for an audience and here it feels like he was still on form with this. It is very funny, observed in terms of human action and of course human frality. It is also light hearted enough to cope with itself, akin to Bruce Almighty. 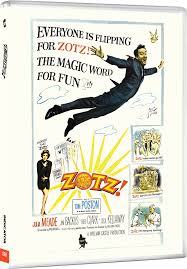 Ummm. You know you cant complain about something when it is so good that it leaves you warm inside. The whole of the HD work has lifted the film from a dull standard version around somewhere I think. I know that is obvious but its a good point to make.

The Horror of it all is simply the best thing on the set. Kim Newman walks over the writer of the film Ray Russell. Then he spends another 20 minutes running through Horror writing history, Castle’s place, Russells filmographia and more.

Audio commentary by Diabolique Magazine’s editor-in-chief Kat Ellinger to be fair, we knew this was going to be good. However it is exceptional. Ellinger love for Castle is the thing that allows it to be better than the excellent work already in the Powerhouse releases. The best is the aforementioned campaign by Castle and how Ellinger gets to the heart of its success.

Introduction by Stephen Laws he saw it on screen on initial release. He talks of the supporting cast and Kelloway is a worthwhile person to listen out for. 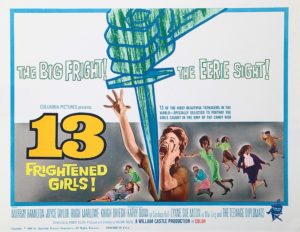 When a diplomats young daughter Candy Hull (Kathy Dunn) returns home from a famous school for girls, she expects nothing but fun and mischief. She has also an eye on intelligence agent Wally Sanders (Murray Hamilton). He is 40 years old and is in love with another woman who is an agent called Solider (Joyce Taylor)
(who is also more age appropriate). He is trying to work out what is happening over in the Soviet embassy. Why are apparant friendly countries now sitting at the table of the soviet empire? Candy will set out to find out the truth. She will spy, take pictures and listen in to conversations, to prove to Wally, she is better than Solider.

13 girls is a spy comedy film in all but name. Very popular at the time after the success of the Bond franchise. It was originally called The Candy Trap but then rebranded to 13 Frightened Girls. It seems Mr Castle struck on the rename because of promotions in other terrortories. 13 girls of differing nationalisty (one is American but   Samm Deighan explores this in the first quarter of her commentary. The problem with this Castle film is simple. You feel missold early on and this leads to a feeling that you are watching a long con. I blame Castle directly for this. It feels like the gimmick has wore very thing indeed. Some will scream at me and say I am a spoil sport but I am being honest. The idea of selecting girls from around the world to star in the picture is not a great way to make a film and the film suffers because of this. 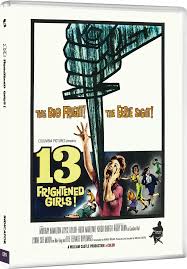 50s tones of colour meet 60s tones of dress and it is captured with rich warmth. I have to applaude the ability to keep the gloriousness of this. No loss or leak. To put it simply it is nice to watch!

Audio commentary by Daughters of Darkness’ Samm Deighan is the best extra on the disc by a country mile. Deighan work is something to hunt out. Here she digests the film, Castle’s confused production and the end result, without falling into the misery I did. She also bridges academic and layman well. A remarkable thing indeed.

Stephen Laws Introduction He might cover ground that Deighan does but its the fact he mentions a serious of very good films starring certian cast members that is worthy of note. Also he is a fan and asks the question ‘what more can you enjoy?’

There is actually 3 version of the film to wacth on the disc. No of them improve it above what it is but the choice is nice. 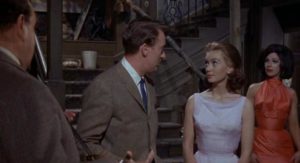 or Turn the lights on will yah!

After a storm strands Tom Penderel (Tom Poston) in a country house, he wished that his formr roommate hadnt gone and died on him. His relatives are living in the house. They cant stay out over night, least they forfeit their inheritance. Now it seems that the house’s occupances are not the only strange things that are in residence.

James Whale directed the original 1932 version. A film that has a legacy and a level of respect in both horror and cult film legions. Castle called The Old Dark House ‘a Priestly Shocker’ and seems to have wanted to take Hammers desire to make the film seriously. They would want a comedy horror film, he would want a film that was able to play on his brand. Actually this stance from Castle would bring it in line with Whale and Hammer and make it a perfect fit. To understand the relationship between Hammer, Columbia and Castle I will not try to best the brilliant Jonathan Rigby Not To Spooky extra on the set. For me the film is what all good Castle films are. A broad send up that leaves you happy but pining for the source materials. It also left me pining for Carry On Screaming! 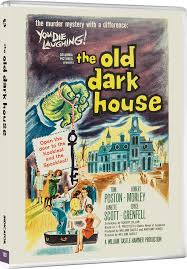 Yep the grading is lovely. In the black and white version (from Columbia’s own print) it has some light loss. The colour print version keeps the grey and colour prominent with the effect being that it looks better than it should in colour.

House and Castle sees Dr Paul Frith discuss the film from a Hammer perspective. It takes us through the rise of censorship of sex and violence and how Carreras decided to alter the output.

Not Too Spooky Jonathan Rigby sits in a lovely front room and sits down to inform us with his robust knowledge. He discusses idea clashes, actors around for Hammer, the films comparions to Carry on Screaming and the differences to the film and story.

Audio Commentary Kim Newman and Stephen Jones could possibly talk about any film. However they have been choosen to speak lyrical about a film they lampooned on another commentary for the better film. They note stars, Ealing, Hammer and hsitories. They note differences and they also try to find good in…well …you know. 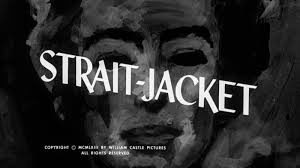 A rather lob sided film that like Castle best work, veers between sensationalism and scandal. A mother (Crawford) returns from a stay in an insane asylum. The doctors consider her well enough to go home but she keeps doing strange things. She also keeps a hold of knives for too long, become distracted easily and disappears at the drop of a hat. Is she cured or is something deeply wrong?

Joan Crawford’s career shifted into the horror genre later in its life. Now for older dames of the screen it was no surprising. After the hit success of 1962’s What Ever Happened to Baby Jane? (where she lived a waking horror), it became the go to for the likes of Bette Davis and Barbara Stanwyck. Jonathan Rigby covers all of this (as well as Castle’s trend following) in his piece Mirror Images. 1964’s Straight Jacket, which is a film about a woman coping with the horror of insanity. Would be considered her second. 1965’s I Saw What You Did was her third and 1967’s Berserk and 1970’s Trog the final two. Let us also not forget Hush, Hush Sweet Charlotte (she was cast but due to issue between her and Davis, well you know).

Straight Jacket lacks a lot of skill in film craft, editing and scripting. It’s a Castle picture and no doubt you expect the master of the sensational to have had a field day with this. The gimmick here seemed to be the axe murders both on screen in their depictions and off in terms of those handed to cinema attendees. Though I agree with the feature making of, that it was not the central force driving the picture and its production on. However, I must agree with other critics regarding one thing. Joan Crawford. Joan gives it 100 % here. Never underplaying the role. She often seems to be slipping further into the praxis of method acting after her prior film sets experiences drove her to the edge. Though I suspect she would have laughed at that. 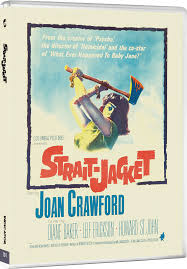 Though I am not an expert (but am becoming one slowly simply from the amount watched!) the picture quality is simply divine. The black and white have body and texture. The scenes where the shadows matter are stark and it all looks cinema quality. Though we expect no less from Powerhouse.

Mirror Images sticks out as the best of the bunch here.

Battle Axe as a making of, it delights in establishing a timeline for the film. Historian Don Glut is the voice of authority here. He knows the ‘Hag movie’ cycle and the power of Castle. Though I agree with David Del Valle that this was Castles dream (though I suspect he saw money in working with Robert Bloch and Crawford, her as a monster as well.)

How to plan a movie murder speaks to the three keys to the film. Director Castle, star Crawford and writer Bloch. It’s a studio piece that massages egos but it is a great document with nice lines.