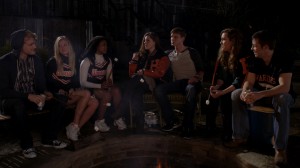 Note from editor: We didn’t forget to give this a star rating, we did… 0.

Wow – so Varsity Blood is shit.

There isn’t a whole lot more to say about Jake Helgren’s attempt to make a teen horror slasher – whilst all the tropes that the audience have come to love and expect appear; fit jocks, geeks, mean cheerleaders and a dark cabin in the woods, Helgren somehow forgot every other horror he had watched and just ended up making something that was flat, boring and frankly lacked any imagination, that it leaves you asking why he bothered. The script was written, the story has already been told – this film has been made 100 times before with varying degrees of success – and whilst few achieve any real critical acclaim (horror seems to be the one genre, which doesn’t necessarily warrant good press), they manage to find their fans who love them just the way they are and usually it is because they are fun, imaginative and captivate the audience from the very start.

But unfortunately Varsity Blood did not do this, instead Helgren’s production decided it was more fun to repeatedly bludgeon the heads of the audience with a film that couldn’t even stick to the rules. Not one character in this film is memorable or likeable and none of them have the talent to carry the suspense or tension that a film like this needs. Whilst Helgren tries to do some sort of Halloween tribute by having a town that has secrets surrounding something terrible that happened the year before, it is not enough to make the audience wonder how it is going to come back and get them this year because his introductions to the characters are sparse and boring.

So the story, set on Halloween night, follows a group of jocks and cheerleaders who decide to go to a cabin in the woods for a party. Booze is 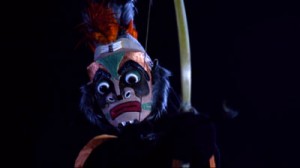 stocked up, parents don’t know where their kids are and the bitchiness between the characters come out – everything that has been tried and tested before. When the school’s mascot turns up with a bow and arrow to slaughter them all, everything turns to chaos (well in the narrative, the chaos really started at the beginning of the film). For some reason because not one character really connects to the audience, there is no sympathy or care when they ultimately die – there is no gunning for some over the others – it just seems like a straightforward and pointless bloodbath.

The chases are uninspired and the cabin itself is so sparse that even props were forgotten from the budget. That and continuity, which the film also lacks in. At one point the audience are outside in the dark, then when they come into the house with the curtains closed and lights off but it is bright due to the sunlight shining through the curtains, which is swiftly followed by returning outside into the dead of the night – wanted us to suspend us disbelief? Think this has taken it too far.

There is really no reason to recommend Varsity Blood to anyone you know, unless you hate them, then maybe you can get your enemy to sit through this trash as well. Shame – with a title like this, it had so much potential.