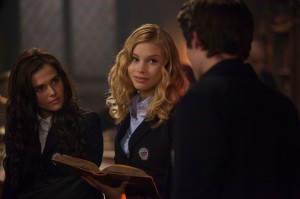 Mark Waters, the director of Mean Girls, the film that pretty much cemented Lindsay Lohan as one of the most famous young women on the planet returns to the teen genre with Vampire Academy, another teen-lit franchise hoping to emulate the success of Twilight. But unfortunately for Waters and the leads of this film (none of whom will become the new Lohan after watching), this film is really a load of rubbish.

Vampire Academy concentrates on the relationship between Rose Hathaway (Zoey Deutch), a dhampir (half vampire, half human) and Princess Lissa Dragomir (Lucy Fry), a Moroi (a type of vampire that co-exists with humans and only takes blood from those who offer it). Lissa is the last of her royal blood line and finds herself in danger when she finds out that the Strigoi, evil vampires who will kill anyone that get in their way, want to kidnap her for their own gain. Rose along with the other dhampir are taught to become guardians to the Moroi at St. Vladimir’s Academy, but Rose has a particularly deep and special relationship with Lissa as it has become clear that she is destined to become her guardian, constantly watching to ensure Lissa’s safety. But of course Rose doesn’t have all the skills just yet to become a powerful watcher and so must be taught by Dimitri Belikov (Danila Kozlovsky), an older dhampir with whom she starts to feel an emotional connection with.

Waters slowly reveals the other characters; Headmistress Kirova (Olga Kurylenko) whom appears to be hiding a secret, Christian Ozera (Dominic Sherwood) the handsome bad boy that Lissa fancies, Victor Dashkov (Gabriel Byrne) a dying Moroi who is part of a dynasty, Natalie (Sarah Hyland), Victor’s granddaughter and a loner that becomes friends with Rose and Lissa as well as a whole gaggle of others jock looking boys and pretty girls who go out of their way to bully and taunt Rose, Lissa and Natalie.

The biggest issue with Vampire Academy is that quickly the story becomes convoluted and unnecessarily intertwined within its own mythology; whilst 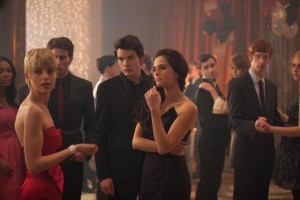 at first there does seem some great potential in a straight forward teen comedy/drama where the characters are vampires, Waters seems to be stepping away from the whole idea of subverting the mainstream and satirising it as he did with Mean Girls and instead is diving headfirst into a story with twists and turns that just lose the audience along the way. Unfortunately pretty much every character is one dimensional and despite an effort at trying to find out about their pasts and makes the audience empathise with them, it becomes harder and harder to give a damn especially as the performances are pretty much stale throughout.

Furthermore the choreography of the action scenes within Vampire Academy feel wooden and so filled with a lack of confidence that it leaves the audience wondering what the point was in the first place.

The only highlight of the film is anything with Hyland, who has become popular due to her role in Modern Family. Natalie is an archetypal character that appears in pretty much all teen movies – she is the outsider, with a sense of humour and a heart of gold – she really is the closest to Cady Heron (Lohan’s character in Mean Girls) and that is quite possibly why her characterisation is the best. Her moments are truly funny and she does have a gift for comic timing as audiences have seen elsewhere and even when her character falls into ridiculousness, which is difficult not to do within this film, she is still the most interesting thing on screen. 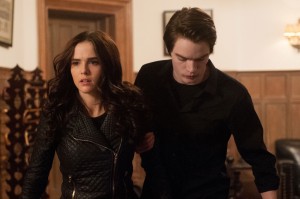 The action is tepid at best, the chemistry between the two leads is forced and unfathomably uninteresting and it seriously leaves you wondering why Waters would have his name on this project and how they managed to cast people like Gabriel Byrne and Joely Richardson (who appears in two short scenes as Queen Tatiana – pretty much wasted in the film). There is some eye candy in the form of Sherwood, which does help proceedings along as much as possible but he doesn’t understand bad boy sex appeal and never quite manages to balance being an angry teen with sexy angst, which are very different things (see Heath Ledger in 10 Things I Hate About You).

Unfortunately it seems like Vampire Academy may be one that comes and go’s with little effect; a franchise based upon the novels of the same name that may never be realised – it did have the potential and even with the latched on cliffhanger ending of the film, it really doesn’t make sense to put this cast and the audience through the torture of another one of these.