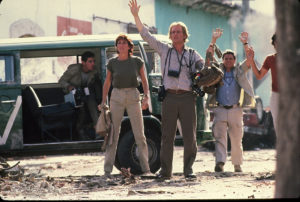 Roger Spottiswoode’s UNDER FIRE might be a poor mans version of SALVADOR, Oliver Stone’s frankly, mesmerising gut punch. However it is also a refreshing film about the power of documenting war, lies and the visual documentation of events. Roger Spottiswoode’s was an editor and this shows in the films swift, smooth movements and its energetic action scenes. Now after A PRIVATE WAR released last year it seems the audience want to here the narratives again. The documenting both visual and audiable telling of war and civil disharmony via the media, has become in vouge again. Nick Nolte, Gene Hackman and Joanna Cassidy star as three journolists. Russel Price (Nolte) is a photo-journalist with a dream. Claire Stryder (Cassidy) is his love interest. Her husband, Alex Grazier (Hackman) is a producer looking for a story. Caught up in the war between the Nicaraguan government and the Sandinista rebels, they begin to get caught in the deceit at the heart of modern conflict. All captured on 35mm. 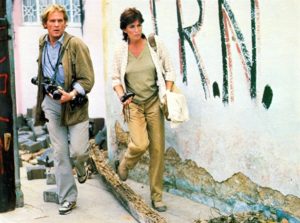 Released at a time when a host of films were floating around, SALVADOR and THE KILLING FIELDS being far more powerful and potent as films. Based on a series of different influences and released on a tide of films that looked at the small wars which riddled the cold war period. UNDER FIRE reviews the growing power of photo journolism in the modern age. In truth it is almost directly inspired by the (footage still exsits on Youtube no less) of the 1979 Nicaraguan murder of ABC reporter Bill Stewart and his translator Juan Espinoza by National Guard. UNDER FIRE came into the film world as a rather hard to navigate piece. What I mean by this is the following. History of the event had played out before. The horror was palpable and the retelling was not. So a studio seemed to want to engage with an event but distanced itself. This is not the fault of the cast, who are frankly excellent. It is the directors lack of attention to political questions. Swerving the big questions also is the fault of the screen writers. Who muddy the waters with a Guerava event that dilutes the eventual awful scene. 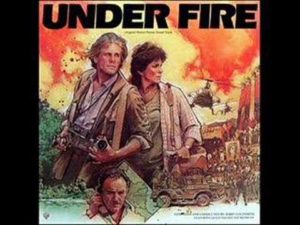 The 1080 is not stunning. It is not stunning at all. It is life less and dull. The image is bloated and the colour washed out. I was less than impressed.

Commentary by director Roger Spottiswoode is the best of the bunch. Talking like his father with an engaged layer approach to film form and the screen. I would say start here and stay here. Film Historian Nick Redman also is very good indeed.